Greenland ice loss rates 'one-third' of what was thought

The rate at which ice is disappearing from Greenland and Western Antarctica has been seriously overestimated, according to new research. 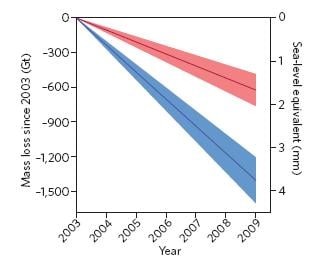 Measuring a disappearing ice cap is actually quite difficult to do, as the areas in question are remote, hostile environments and the exact depth of ice is often unknown. This has caused a lot of argument among climate scientists regarding how much ice is melting and running into the sea, as this affects predictions of sea-level rise and other aspects of climate modelling. (Floating sea ice, like that which makes up most of the Arctic cap apart from Greenland, is less of an issue as its melting doesn't affect the sea level.)

Thus it is that since 2002, NASA's Gravity Recovery and Climate Experiment (GRACE) satellite data has been used to make an estimate of ice melt from Greenland and Western Antarctica. (The rest of Antarctica doesn't seem to be melting at all - indeed Antarctica as a whole is actually gaining ice area rather than losing it - but some regions in the West are melting. The reasons for this are under investigation.)

The original GRACE-based estimates indicated as much as 1,500 billion tonnes ice loss just from Greenland in the period 2003-2009 - equivalent to a global sea-level rise of over 4mm on its own. However it has since become clear that these numbers weren't properly corrected for the phenomenon of "rebound", where the Earth's crust rises as ice is removed. GPS precise-location devices fixed to bedrock outcrops in Antarctica showed this last year, but nobody was sure how bad the errors were.

Now a team of researchers based at NASA's Jet Propulsion Laboratory and in the Netherlands say they have the answer.

"The corrections for deformations of the Earth’s crust have a considerable effect on the amount of ice that is estimated to be melting each year," explains Dr Bert Vermeersen. "We have concluded that the Greenland and West Antarctica ice caps are melting at approximately half the speed originally predicted."

Vermeersen and his colleagues' calculations show that as little as 500 gigatonnes of ice or even less could have melted from Greenland during 2003-2009, translating into less than 2mm of sea-level rise. In the case of Greenland, it could be that the current estimates are triple what they should be.

"For Greenland in particular, we have found a glacial isostatic adjustment model that deviates rather sharply from general assumptions," says Vermeersen.

Both the JPL/Dutch team and other boffins examining the work caution that more GPS locators need to be attached to the bedrock in order to refine the results.

For those who'd like to know more, a statement issued yesterday by Vermeersen's university is here. The new research can be read here by subscribers to Nature Geoscience, and analysis of it by independent expert boffins likewise here. ®