US raygun jumbo jet fails to beam down test missile

Agency: 'We didn't tell you? You didn't ask' 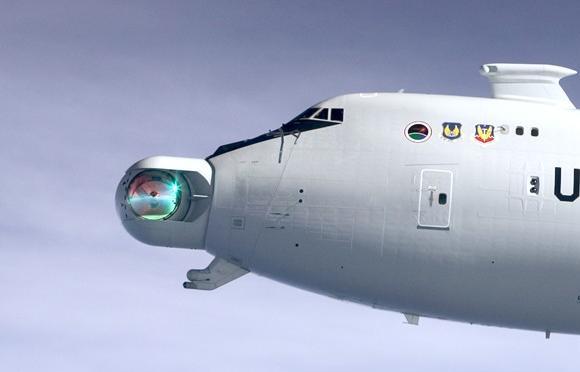 You miss one missile...

The US Missile Defence Agency (MDA), in charge of the test, saw fit not to announce the test or its failure until prodded by journalist Sharon Weinberger. The MDA had previously repeatedly announced test dates before postponing them due to technical hitches.

"We didn't get any queries until today," an MDA spokesman told AOL News, explaining the agency's silence on the failed trial. It appears that the ALTB did manage to put its multi-megawatt hellray onto the test missile, but failed to destroy it - perhaps losing its lock on the target or suffering a problem with maintaining the beam.

"Program officials will conduct an extensive investigation to determine the cause of the failure to destroy the target missile," the MDA said in a statement.

The ALTB was formerly known as the Airborne Laser (ABL), until plans for an operational fleet of blaster-jumbos were axed and the existing prototype plane downgraded to the status of an experiment by the incoming Obama administration.

The beleaguered rayguncraft finally managed to blast a test missile out of existence in midair during a live test in February, but this was at relatively short range - approximately 50 miles. In order to be viable, operational ABLs would need three-figure range so as to suppress missile launches while remaining outside an enemy's territorial/defended airspace. Last week's test was intended to prove such capability.

Even if it had succeeded, however, the likelihood of the USA actually deploying a fleet of raygun jumbos would have remained slim. The ALTB's chemical gas laser technology is the only practicable method at the moment to generate a multi-megawatt beam, but it has severe disadvantages.

The fuels for the raygun are corrosive and toxic, as are the exhaust products, and though details are classified US officials have suggested that a blaster-jumbo needs reloading after only a few "shots". Such a reload, packaged on wheeled carts for use at a forward airbase, would fill two monster C-17 transport planes - indicating that supporting an operational fleet of ABLs would be a huge and expensive effort.

Senior US officers still believe that directed-energy weapons are a viable future technology, but cumbersome ALTB-style chemical rays are out of fashion as solid-state electrically powered jobs continue to increase in power - though remaining for the moment well below megawatt range. Electric lasers have their own problems, however: not least the fact that they tend to release much more energy inside themselves as heat than they put into their beam, presenting severe cooling difficulties.

Belief in rayguns is not confined to the US, with reports lately indicating that Russia's Beriev A-60 - its answer to the ABL - has been brought out of Cold War mothballs and is flying again, perhaps with an eye to blinding US spy satellites should that be required.

Just what effect last week's test failure will have on the US ALTB programme remains to be seen. ®