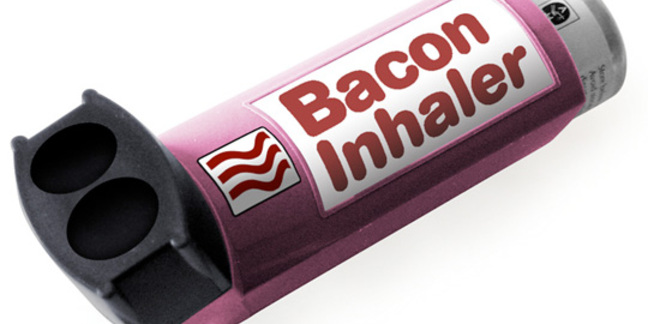 Surrey police are hunting a burglar who broke into a house in Redhill, Surrey and swiped a packet of bacon - except for a single rasher left chillingly draped over the front door handle.

As well as clearing the family's fridge of their salty pork belly breakfast meat, in the early hours of September 4, the thief also swiped a phone from the hallway. The phone was later recovered, police said. Not so the bacon.

Police said the mystery breakfast raider did not cause any damage, though presumably the door handle needed a good wipe after he decorated it with the mysterious solitary rasher.

Surrey Police have issued a CCTV image of a man they would like to speak to. He is described as white with short dark hair and a moustache. He was wearing dark trousers and a dark t-shirt with a white motif on the shoulder.

Detective Constable Julian Knowles said: “The victims are at a loss to understand why someone would break-in to their house and steal a packet of bacon and we are equally stumped as to who this potentially peckish suspect is."

In June, a 29-year-old in Dudley was convicted of stealing £100 worth of bacon from a butchers store room. In March, a 31-year-old homeless man was convicted of stealing £38 of bacon in Reading. Apparently the perp had hoped to fence the bacon for drug money. In 1988, a portrait of Francis Bacon by Lucian Freud was stolen from a British Council exhibition in Berlin. ®

A big splash of ketchup to Michael Gibson for bringing this porcine purloinery to our attention.

Infosec in spaaace! NCC and Surrey Uni to pore over satellite security

There's a PhD position in it too, if you want to get involved