Hot on the heels of our recent announcement that we'd make the design of the Paper Aircraft Released Into Space (PARIS) Vulture 1-X aircraft available to the unwashed masses, we're delighted to say that our CAD rendering of the vehicle is beginning to take shape.

As PARIS aficionados know, we've currently got as far as the fuselage, while we battle on with the pesky wings, which have been causing us a few sleepless nights.

The delay in finishing Vulture 1-X has, though, provided local CADmeister Federico Buenadicha the chance to capture the structure as it currently stands, and he'll be adding stuff on as the plane progresses.

Here's a snap of our space plane captured back in July...

...and here's how that looks in the virtual world: 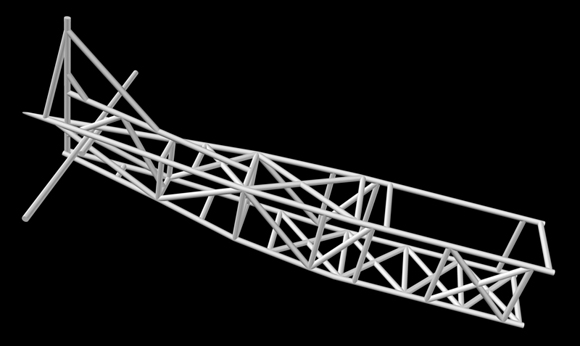 All of this wizardry, with plans and dimensions, will be released in due course.

In the meantime, the PARIS team is off to QinetiQ's hypobaric chamber on Monday for the test of the Mk 2 release mechanism. If the damn thing doesn't work, we have a problem, so it's fingers crossed... ®