Only a matter of time until Google gets involved

Military-funded researchers in the US have developed a backpack system containing cameras, lasers and inertial sensors which can be carried around indoors and generate a detailed, accurate 3D map of the spaces it moves through. 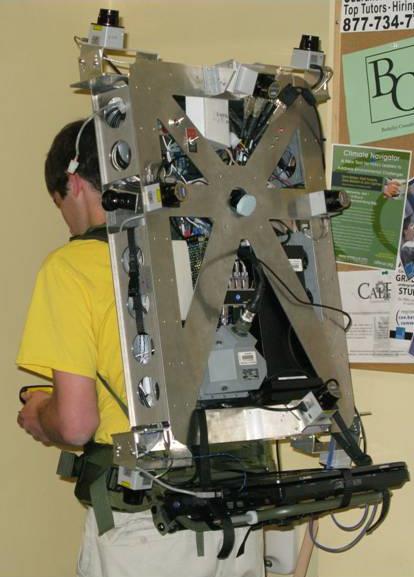 Now we just need to get the damn mole cruiser finished.

"We have also developed novel sensor fusion algorithms that use cameras, lasers range finders and inertial measurement units to generate a textured, photo-realistic, 3D model that can operate without GPS input and that is a big challenge," says Dr Avideh Zakor, lead engineer on the mapperpack.

"It is typical of the work that Professor Zakhor has done for the [US military research labs] over the years, that she meets these challenges head-on, and in most cases solves the problem," enthuses Dr Jon Sjogren of the US Air Force Office of Scientific Research, which contributed funding to the project.

The backpack could be used to create accurate 3D models of buildings or underground tunnel complexes, which are difficult to map accurately using conventional tools such as satellite navigation - whose signals can't penetrate indoors or underground.

"We have already generated 3D models of two stories of the electrical engineering building at UC Berkeley, including the stairway and that is a first," says Zakhor. ®

If you absolutely must keep using those proprietary formats, walk this way
Applications19 Aug 2022 | 16