'Hyperbolic map' of the internet will save it from COLLAPSE

International computer boffins are warning that the internet may "collapse" at some point within the next decade. They propose the use of a new routing method based on hyperbolic geometry, and have devised what they call a "hyperbolic atlas" of the entire net to aid in this plan. 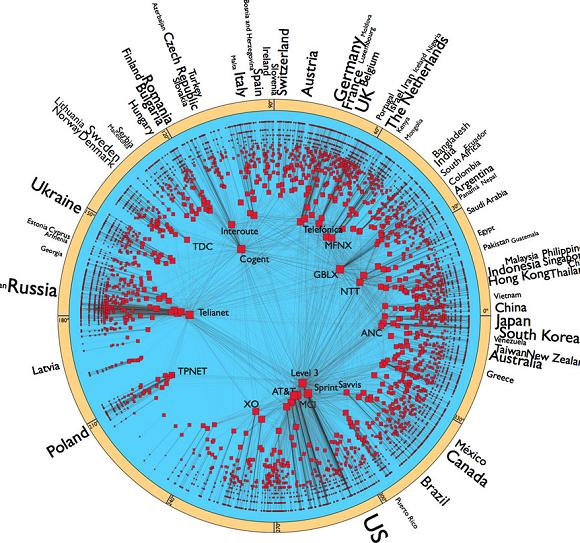 "Routing in the Internet today is based on a topographical map that does not take into account any geometric coordinates in any space,” says Dmitri Krioukov of the Cooperative Association for Internet Data Analysis (CAIDA) at the University of California.

“It is very complicated, inefficient, and difficult to scale to the rapidly growing size of the Internet, which is now accessed by more than a billion people each day. In fact, we are already seeing parts of the Internet become intermittently unreachable, sinking into so-called black holes, which is a clear sign of instability," he adds.

Krioukov and his colleagues write:

The Internet infrastructure is severely stressed. Rapidly growing overheads associated with the primary function of the Internet — routing information packets between any two computers in the world — cause concerns among Internet experts that the existing Internet routing architecture may not sustain even another decade.

CAIDA has a project called Archipelago, aka Ark, which constantly monitors the structure of the internet and its connections.

Krioukov, with his colleagues at CAIDA and the help of Marián Boguñá in Barcelona and Fragkiskos Papadopoulos in Cyprus, has developed a method the team call "hyperbolic mapping" for charting the apparently "negatively curved" shape of the internet in "hyperbolic space". They say that this would allow much more efficient routing and prevent the otherwise inevitable collapse of the internet as billions more people pile onto it.

According to a statement issued yesterday by the University of California:

Instead of perpetually accessing and rebuilding a reference list of all available network paths, each router in the Internet would know only its hyperbolic coordinates and the coordinates of its neighbors so it could route in the right direction, only relaying the information to its closest neighbor in that direction, according to the researchers. Known as “greedy routing”, this process would dramatically increase the overall efficiency and scalability of the Internet.

But Krioukov cautions that going to hyperbolic greedy routing won't be simple.

“There are many technical and non-technical issues to be resolved before the Internet map that we found would be the map that the Internet uses,” he warns.