'We do understand there's a downside to this'

Worrying news from Georgia, America, where boffins report that they have developed robots which are able to "deceive a human".

"We have been concerned from the very beginning with the ethical implications related to the creation of robots capable of deception and we understand that there are beneficial and deleterious aspects," says Ronald Arkin, interactive-computing prof at the Georgia Institute of Technology. 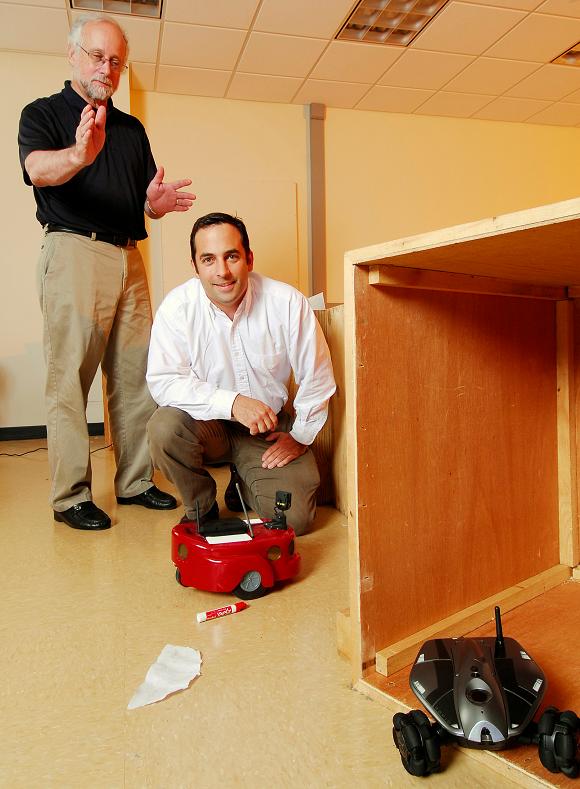 Old Red, the Roscoe P Coltrane of the robot world

"Robots will probably rarely use deception, but it's still an important tool in the robot's interactive arsenal because robots that recognize the need for deception have advantages," adds Arkin's fellow liar-droid builder, GIT engineer Alan Wagner.

The method chosen by the two men to test their new and mendacious robot algorithms was that of setting one robot to try and hide from another. The fleeing droid would move through a region of prepositioned markers, knocking some of them down and so leaving a trail indicating where it was going.

But the cunning decepto-bots naturally laid false trails, swerving off towards alternative hides once clear of the markers.

"The hider's set of false communications was defined by selecting a pattern of knocked over markers that indicated a false hiding position," explains Wagner.

This fiendish plan apparently fooled the hunter droids 75 per cent of the time.

"We have developed algorithms that allow a robot to determine whether it should deceive a human or other intelligent machine and we have designed techniques that help the robot select the best deceptive strategy to reduce its chance of being discovered," says Arkin, proudly.

"We strongly encourage discussion about the appropriateness of deceptive robots to determine what, if any, regulations or guidelines should constrain the development of these systems," adds the prof.

So there you have it - conclusive proof that robots are quite capable of lying to or otherwise deceiving their fleshy masters. Don't trust the machines.

Arkin and Wagner's paper Acting Deceptively: Providing Robots with the Capacity for Deception can be read in here (pdf). ®