What do our mandarins really think of global warming?

Interview The former head of the civil service has called for a new approach from scientists and policy makers to restore waning trust in climate scientists. Speaking to The Register, Lord Andrew Turnbull, former cabinet secretary and head of the Home Civil Service between 2002 and 2005, says the University of East Anglia's internal enquiries into the Climategate affair were hasty and superficial, and called for Parliament to sponsor two wide-ranging investigations.

One study should examine the "ethos and governance" of climate science. The other should conduct "a fundamental review of the science itself". He thinks policy makers are getting skewed and self-centered advice. 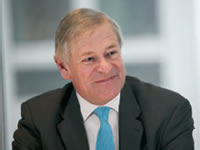 Was he speaking out because of the damage to Britain's academic reputation, or the implications for policy? Both, he told us.

"The so-called guardians have bought into a particular narrative. I'm not a skeptic, I can compare what my childhood was like, and I can see climate change going on," said Turnbull. Nor does he contest the radiative properties of CO2. But the hypothesis depends on positive feedbacks that are far from certain, and these haven't been explained to the public, with confidence wrongly assumed.

"We get fed a Janet and John version - a simplified story, and the world's politicians use this to persuade the world's electorates to take action, and action soon."

Now we're in the internet age, he thinks is untenable.

"This is backfiring because people are intelligent enough, and well-armed enough with information.

"The deference is no longer there. We don't live in that kind of world any more. People in the blogosphere don't have to accept these and other statements from the authorities, and they will challenge them. We have seen that they can challenge them quite effectively."

Did he think the inadequacy of the Climategate enquiries would leave lasting damage to the British reputation?

"I see some damage to British academia, and lasting damage to the [University of East Anglia] Climatic Research Unit which is possibly terminal, really. I don't see how it can now recover.

"The Russell Report talks about the 'rough and tumble' of academic argument. But all this is publicly funded research programs. They're not arguing about whether Dickens is better than Jane Austen - their work goes to the basis of public policy."

Wouldn't academics resent the intrusion, and defend the principle of academic freedom?

"Does academic freedom include the freedom to stop other people being published at all?" he asks.

"There's an observation in Muir Russell's report that's very good, you can't fault it, and I'll quote it. The report points out that 'It is important to recognise that science progresses by substantive challenges based on rigorously logical, published arguments that present a different view of reality from that which they challenge'. This is absolutely correct.

"But then you get the CRU scientists saying the opposite. They were engaging in groupthink. And having set out the principles the enquiries haven't used them to make judgement about what they found."

Parliament probably doesn't have the resources to conduct the two studies by itself, Turnbull says, and staffing them with people who haven't bought into the 'Janet and John' version might be tricky - but not impossible.

"There are some people in the Royal Society who think it's gone too hard over onto the simplified consensus. There are climate changers who believe in the most sophisticated version and who are prepared to be more admitting of doubt - but they all fear they get branded as 'deniers'."

Next page: What do civil servants really think?
Page: