A 29-year-old woman who was refused a cab ride from Louisiana to Michigan responded by whipping off her kit on the back seat and then stealing the taxi, the Times-Picayune reports. 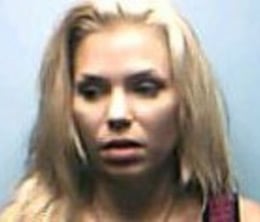 Jennifer Gille, 29, (pictured) caught a cab from a motel in Covington at around 1am on Sunday. The driver duly delivered her to a spot south of the city, but his passenger "refused to get out of the cab and began behaving erratically".

Covington Police spokesman Captain Jack West explained that she "first took off her clothing, then demanded that the cabbie take her to Michigan".

The cab driver whisked the naked refusenik to Covington police station, but made the mistake of popping inside to get assistance, at which point she stole his cab.

Officers found the car and Gille, "still naked" on the back seat, about a block away. She was forcibly removed from the vehicle, obliged to put her dress back on, and cuffed for "unauthorized use of a movable and obscenity".