A fearmongering company has this week launched its brand of maternity tinfoil, dubbed "Belly Armor", in San Francisco. The makers of Belly Armor claim that it offers "guaranteed protection" for a pregnant wearer's unborn child from the dangers of "everyday radiation", for instance from mobile phones or computers. 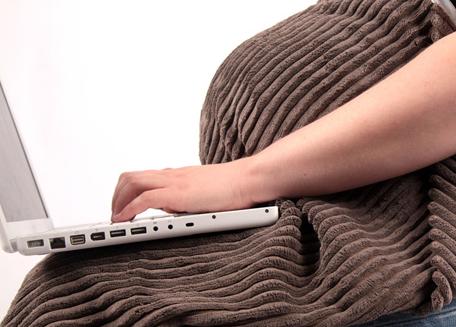 Using a Mac could KILL YOUR BABY

Quite apart from these dangers being baseless claptrap to begin with, in fact there are many types of everyday radiation against which Belly Armor appears to offer no protection: and further, it's worth noting Belly Armor is nothing more than rebranded and seriously overpriced anti-body-odour fabric.

No, really. According to makers RadiaShield Technologies, the fabric in Belly Armor products is "a woven fabric made of 82% silver fiber". The company has hired an independent lab to verify (pdf) that the textile is a barrier to electromagnetic waves in the frequency range 10 MHz to 8 GHz, covering many consumer technologies such as cell phones, Wi-Fi, Bluetooth etc.

CNET news, reporting on the fact that Belly Armor products can now be purchased retail in the Bay Area, quotes CEO Aileen Chen as stating:

"People are expecting the heavy, dentist-office-type aprons but are surprised to find our RadiaShield fabric is lighter than the cotton found in T-shirts."

The unnamed people are evidently not too savvy regarding the electromagnetic spectrum, as the aprons sometimes used by dentists are intended to shield against X-rays - which actually can penetrate the human body easily (that's why they're used for taking pictures of its interior, after all) and inflict ionising damage on it.

Radio and microwave frequencies, by contrast, don't ionise what they hit: the worst they will do to anything is warm it up. They can also be made to dump the generally minute amounts of energy they carry into correctly arranged conductors in the form of tiny electrical currents (that's why we use them to communicate, after all - the conductors being the receiving antennae).

Silver being an excellent conductor, it's no surprise to find that a given silver fibre fabric attentuates signals by more than 40 dB (eg 99.99 per cent) in the frequency range 10 MHz to 8 GHz, with a sharp dropoff at either end suggesting that outside this band the effect disappears.

So you could drape a Belly Armor blanket over your bump and type away on your Wi-Fi laptop or fiddle with your cellphone and baby will receive no emissions from the device. Things behind you or otherwise with un-Belly-Armor'd line-of-sight to the foetus will be unaffected, though! Think of your husband's phone! The Wi-Fi router! The cordless phone base station and handsets! Aiee!

Next page: It's actually intended for people who smell
Page:

Analysis For all the billions poured in, is a 'Made in America' sticker worth it?
Systems18 Aug 2022 | 7