Review Microsoft took an unusual approach with Internet Explorer 9, first releasing "Platform previews" that showed off the new rendering engine but with little user interface, before finally issuing a beta that shows off its full features.

The engine is the big story, with its implementation of a significant chunk of HTML5, hardware acceleration, and fast new JavaScript engine, making Wednesday's beta launch a comparatively minor event. This is no re-invention of the browser, but a refinement of familiar elements, and in some cases, it echoes what Google has already done with its Chrome browser.

The changes start with the One Box address and search bar. Cutting out the separate search box is in line with Microsoft's goal of a minimalist user interface, putting the focus on web sites rather than on the browser. It is not all gain, especially if you care about the difference between an URL and a search, and the old UI made it easier to try the same search with different engines. Still, you can see the appeal of having just one place to type and hit Enter. 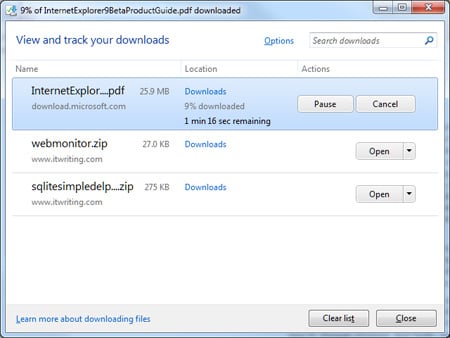 Next come the menus, or lack of them. Microsoft has been on a crusade against menus since the appearance of the ribbon in Office 2007. The price of the clean appearance this gives is that certain functions are harder to find.

In IE8 you could show the menus if you chose, but in IE9, they have to be summoned by pressing Alt. The important function "Find on this page" was part of the search box in IE8, but in IE9, it has moved to the File menu under the gear wheel icon, or the Edit menu if you press Alt, or Ctrl-F if you know the shortcut. It is a minor detail, but this inconsistency illustrates the downside of hiding traditional menus.

Microsoft will say that few care about such things, since its research indicated that users interacted with web sites first, with Windows second, and only rarely with browser features. Now that those features are even harder to find, this pattern will continue.

Another nod towards minimalism is that the status bar is off by default. IE9 still shows the URL to which a link points, but it's now in a tooltip at bottom right.

Many notifications have shifted from the yellow alert along the top, to a panel towards the bottom of the IE9 window. This is less intrusive, and therefore easier to miss, which is a good or bad idea depending on whether you wanted to see it. One common case, downloading files, is notably improved.

In place of IE8's bewildering yellow warning, there is a common-sense prompt with Run, Save or Cancel options. There is also a download manager window, which helps users to find what they have downloaded: a common problem, as anyone who has done technical support will testify.

Download safety is supposedly enhanced by a new SmartScreen filter which checks URL reputation, though this feature is not yet enabled. There is also an automatic virus scan. 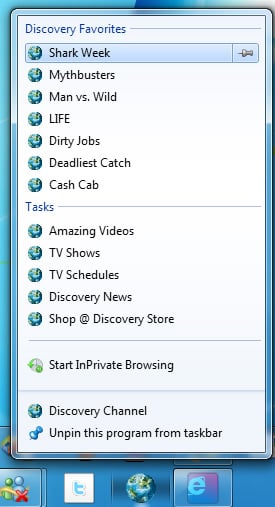 The Performance Advisor is a neat feature that measures the load time of enabled add-ons, and prompts you to consider disabling some of them if the total time is more than 0.2 seconds.'

Tab management has some enhancements. New tabs show your personalized list of popular sites, nicely laid out with bars showing frequency of use. You can also drag and drop tabs between IE instances.

The most interesting aspect of IE9 is its operating system integration, particularly for users of Windows 7. Users can pin open tabs to the taskbar or Start menu. Once pinned, code on a web page can customize its shortcut, adding items to the right-click Jump List, overlaying the icon with personalized graphics, and implementing button controls in the taskbar preview window. In addition, a web site launched from the taskbar has subtle differences, such as a custom window icon, and no Home button.

These features are mainly aimed at web applications, and program manager Scott Hanselman has a detailed description explaining how to adapt a web page to support them. It is not difficult. The main snag is that the Windows 7 taskbar does not cope well with a large number of shortcuts, relying on awkward scroll buttons once you have several rows.

IE9 is a speedy, smooth, standards-compliant browser, and good enough that Windows users will have less incentive to switch to alternatives. Nevertheless, there are areas of weakness. One is that Windows XP is not supported, handing an immediate advantage to rivals like Mozilla who still do, and even Windows Vista users do not get the full benefit.

Another issue is that IE lacks the range of add-ons available for Firefox and even Chrome, partly because there is no open source community around it. Although for Microsoft IE9 is a major advance, competitors can rightly observe that much of it is catch-up. Further, the slow pace of Microsoft's release cycle gives its rivals time to improve in areas like hardware acceleration before IE9 goes gold.

Nevertheless, given the extent of IE's usage and the changes Microsoft's made, this release should have significant impact. ®