The X Prize Foundation has announced the winners of the $10m Progressive Insurance Automotive X Prize challenge, and the $5m winner of the Mainstream Class was neither a hybrid nor an all-electric vehicle.

"When we began this process," said the leader of the winning Edison2 team, Oliver Kuttner, "we followed the general assumption that building a hybrid, or partially electric vehicle, would be the answer to building the most efficient car."

But that didn't turn out to be the case.

"In careful research," Kuttner continued in a video interview, "we came to think that by far the lowest hanging fruit was just to build the best platform. The most efficient platform, by definition, is the lightest, lowest aerodynamic drag platform. We quickly realized that lugging around hundreds of pounds of batteries was conflicting with that philosophy."

And so Kuttner's team — which consists of over 100 people, many from racing backgrounds — created the aptly named Very Light Car. In their quest to build a vehicle that could meet the X Prize's goal of 100 miles per gallon (or thereabouts, as we'll explain in a bit), they powered the VLC with a 250cc, single cylinder, dual overhead cam, turbocharged Yamaha engine that maxes out at 40 horsepower and 29 ft-lbs of torque while running on E85 fuel, a mix of 85 per cent ethanol and 15 per cent gasoline. 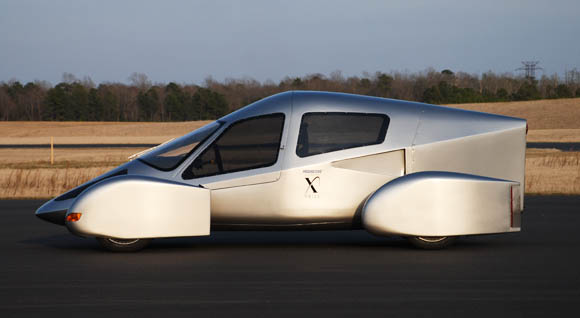 'I'm not for or against electric cars, I'm for efficient cars,' says the VLC's team leader

The VLC is very light, indeed, weighing it at 830 pounds (376kg). While that may seem weighty when compared with solar-powered waifs such as the Umicar Infinity, Nuna 4, or contestants in, for example, the World Solar Challenge, it's impressively svelt when you keep in mind that to compete in the Automotive X Prize's Mainstream Class, a car has to be, well, a car and not a delicate silicon-encrusted table-on-wheels.

The VLC is quite car-like: it seats four, has 22 cubic feet of luggage capacity, heating and air conditioning, a six-speed manual transmission, three-speed windshield wipers (with an intermittent mode, as well, natch), and even an iPod-powered stereo system.

And the X Prize judges found after road testing at Michigan International Speedway and laboratory verification at the US Department of Energy's Argonne National Lab that the VLC did manage to achieve that 100 mile per gallon goal: 102.5 MPGe, to be exact.

MPGe, however, isn't the same thing as MPG, and the X Prize award was calculated in terms of MPGe — miles per gallon equivalent — not MPG. As explained by the X Prizers, MPGe is calculated as follows: (miles driven) / [(total energy of all fuels consumed)/(energy of one gallon of gasoline)]. Thankfully, they've also provided an Excel spreadsheet you can download here to help you determine MPGe for an assortment of fuels and electricity sources.