Quite a party, orbiter shows

Data from NASA's Lunar Reconnaissance Orbiter (LRO) have revealed the Moon's "turbulent youth", during which it was pounded by "two distinct populations of asteroids or comets".

The agency has put together a "detailed global topographic map" of our satellite, captured by the LRO's Lunar Orbiter Laser Altimeter (LOLA), showing how an early large-fragment bombardment of the surface was followed by an assault by relatively small objects. It includes this view* of the Moon "from the vantage point of the eastern limb": 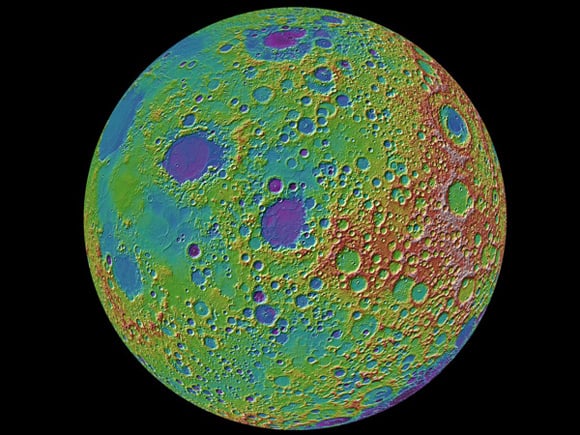 As James Head of Brown University puts it in the latest edition of Science: "Our new LRO LOLA dataset shows that the older highland impactor population can be clearly distinguished from the younger population in the lunar 'maria' - giant impact basins filled with solidified lava flows.

"The highlands have a greater density of large craters compared to smaller ones, implying that the earlier population of impactors had a proportionally greater number of large fragments than the population that characterized later lunar history."

LOLA has also enabled Head to estimate just when the big rocks stopped falling. He elaborates: "Using the crater counts from the different impact basins and examining the populations making up the superposed craters, we can look back in time to discover when this transition in impactor populations occurred. The LRO LOLA impact crater database shows that the transition occurred about the time of the Orientale impact basin, about 3.8 billion years ago.

"The implication is that this change in populations occurred around the same time as the large impact basins stopped forming, and raises the question of whether or not these factors might be related. The answers to these questions have implications for the earliest history of all the planets in the inner solar system, including Earth."

All of this crater-gazing could prove significant for studies as to how our own planet suffered at the hands of comets and asteroids. While there is evidence of this pounding - such as the "110-mile-diameter, partially buried crater at Chicxulub, in the Yucatan Peninsula of Mexico", resulting from a significant hit 65 million years ago - most of the scars have long since disappeared.

The Moon, free of erosion and other crater-wiping factors, is "analogous to a Rosetta stone for understanding the bombardment history of the Earth", Head explained.

He concluded: "Like the Rosetta stone, the lunar record can be used to translate the 'hieroglyphics' of the poorly preserved impact record on Earth."

Head's study in Science is accompanied by two further papers the findings from LRO's Diviner Lunar Radiometer Experiment, demonstrating that "the geologic processes that forged the lunar surface were complex as well". NASA has more here. ®

"Most of the dark blue areas are lunar maria, low lying regions composed of volcanic lava flows that formed after the heavily cratered lunar highlands (and are thus much less cratered).

"The topography is derived from over 2.4 billion shots made by the Lunar Orbiter Laser Altimeter (LOLA) instrument on board the NASA Lunar Reconnaissance Orbiter. The large near-circular basins show the effects of the early impacts on early planetary crusts in the inner solar system, including the Earth."