Over Rainbow Falls with a splash

The Sparc T3-2 server doubles up on the entry Rainbow Falls box, plunking two T3 processors in a 3U rack-based box and doubling up main memory to 32 slots and a maximum of 256 GB. (Again, the spec sheet says 1.6 GHz chips are used, but the processor spec sheet says the chip runs at 1.65 GHz). Some disk space gets sacrificed to make the Sparc T2-2 machine, which only has room for six 300 GB small form factor disks and a DVD drive along the right six of the chassis. The front of the chassis is dominated by three fans, which keep all that memory and those two processors cool.

The Rainbow Falls T3-2 server only supports 4 GB and 8 GB DDR3 memory sticks, by the way, and it will probably get support for 16 GB sticks before too long. The server has four integrated Gigabit Ethernet links on the mobo, and you can snap in a mezzanine card to link into the four native 10 Gigabit Ethernet ports on those two T3 chips. The system has ten PCI-Express 2.0 slots (eight x8 and two x4). The box comes with redundant 2,000-watt power supplies and also includes a RAID 0/1 disk controller.

The Sparc T3-4 is the drafthorse in the new server lineup, with two or four T3 processors (running at 1.65 GHz). John Fowler, executive vice president in charge of Oracle's Systems and Storage group, said the machine supports up to 1 TB of main memory in his keynote at OpenWorld, but the spec sheet says that it currently tops out at 512 GB with 8 GB memory sticks. 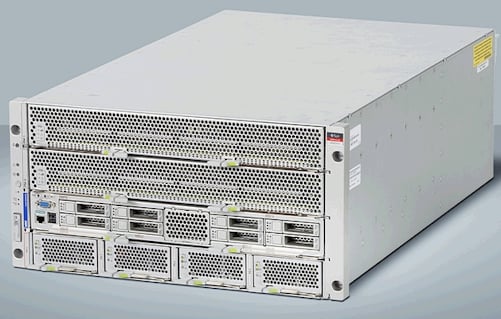 From the outside, it is obvious that the Sparc T3-4 design stacks two two-socket T3 motherboards on top of each other and uses the glueless electronics of the chips to create a four-socket box. The T3-4 server has four hot-swappable power supplies rated at 2,060 (with 3+1 redundancy) that mount in the bottom of the rack unit, followed by eight 2.5-inch disk drives on top of these, and the two system boards on top of those. The box has eight x8 PCI-Express 2.0 slots plus the two optional 10 Gigabit Ethernet ports.

Like other former Sun Sparc boxes and the new Oracle ones, this Sparc T3-4 machine has four Gigabit Ethernet ports on the base system. The whole shebang takes up 5U of space on the server rack. This machine packs 512 threads and will be a contender in the high-end of the midrange for a lot of workloads. Particularly thread-hungry Oracle databases and Java applications. The LDom hypervisor tops out at 128 domains on this server, by the way.

That leaves the Sparc T3-1B blade server, shown below:

It is tipped on its side for the sake of photography, so it might look a bit like a rack-mounted server, but the Sparc T3-1B is not. It slides into Oracle's existing Sun Blade 6000 chassis. The T3-1B blade has a single T3 processor socket with its chips running at 1.65 GHz and sporting 128 threads. The blade has the same 16 memory slots and the same 256 GB maximum memory configuration as the Sparc T3-1 rack server. (They are very likely based on a very similar if not the same exact system board). The T3-1B blade has only two Gigabit Ethernet ports, plus a dedicated 100 Mbit Ethernet port for blade management and the two optional 10 Gigabit Ethernet ports that are driven from the chip. The blade has four 2.5-inch SAS drives and has four PCI-Express x8 slots that reach out to expansion modules at the back of the Sun Blade 6000 chassis.

Oracle Solaris 10 update 9/10 is required on these Rainbow Falls boxes, which also support the latest Oracle VM Server for Sparc 2.0 update (what used to be called Logical Domains or LDoms by Sun). Licenses for both products are bundled on the machines at no cost. The LDom support allows for each thread to be configured with its own Solaris 10 instance, or for many or all threads to span an instance.

Requests for pricing and availability information were not answered at press time. These machines, unlike prior Sparc T series boxes, are not available through the Oracle online store. At least not yet, and very likely never. ®