ZoneAlarm has run into criticism from its customers for using scary pop-up warnings as a marketing tactic designed to persuade users to purchase the paid-for version of its personal firewall.

Users of the free version of the ZoneAlarm firewall are confronted with a "Global Virus Alert" about "ZeuS.Zbot.aoaq" containing a link to buy the paid-for security suite, which contains an anti-virus scanner component developed by Kaspersky Labs.

Users confronted by the warning might easily think their system is infected, although Check Point maintains otherwise. 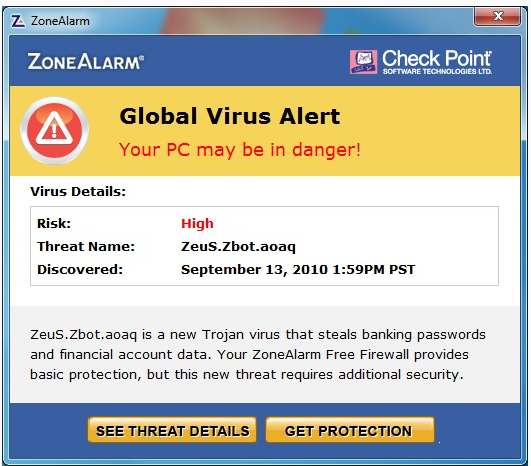 Some users have criticised Check Point, which markets ZoneAlarm, of copying the tactics of scareware scammers via the campaign, which has prompted a minority of users to uninstall the product. Users have taken to ZoneAlarm support forums to criticise Check Point over its "pushy" marketing tactics.

Moderators (gurus) on the support forum have said the pop-up is simply supplying information about a new virus. "There is no indication that your system is infected," they say. Users confronted with a "Global Virus Alert" and "Your PC may be in danger" message could be forgiven for thinking otherwise, we'd suggest.

Rival security vendors are also peeved at the tactic because Check Point links to a graphic suggesting that its security suite protects users from a banking Trojan that isn't blocked by alternatives, including security packages from Norton and Trend as well as freebie scanners from AVG, Avira and Avast, as a graphic from avinashtech.com illustrates.

It seems this data was culled from VirusTotal, without the permission of Spanish penetration testing firm Hispasec Sistemas, which online malware scanning service. In any case, the information is now likely to be dated.

We asked Check Point to comment on the ethics of its marketing tactics, a query that's been passed over to its US team. We'll update this story as and when we hear more. ®