Steve Jobs' App Store for Apple's famous iOS devices - the iPhone, iPad et al - is no stranger to controversy lately. The company has been happy to take a firm and positive stance on various issues, weeding from its lucrative walled garden any dissenting program.

Now, Apple has taken a stance which will upset a lot of Americans: it has allowed an app which specifies quite clearly that evolution is real and that humans and monkeys share a common ancestor some 30 million years in the past. 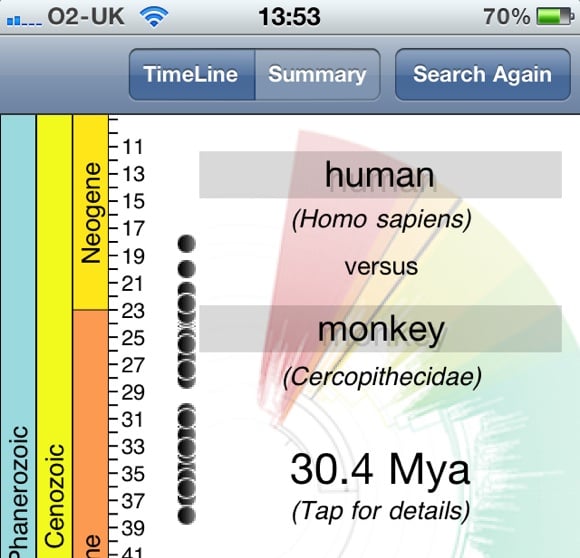 You - and your mom - are descended from monkeys. Steve Jobs says so

The app in question is Timetree, which accesses a public database of the same name describing "the evolutionary timescale of life". It comes to iOS users free courtesy of Pennsylvania and Arizona state universities, and is funded by the US National Science Foundation, National Institutes of Health and NASA.

A user specifies two animals or species to the app, and the Timetree database - ignoring what the Bible has to say on the matter - specifies the two taxa's most recent common ancestor. As the screenshots show, Homo Sapiens (humans) and Cercopithecidae (the Old World monkeys living in Africa and Asia today) are uncontrovertibly deemed relatives, with a common ancestor dating from well before Biblical times.

Evidently Steve Jobs and Apple endorse this view: the company's App vetters are self-described "control freaks" on what is and is not allowed in the Store.

According to a statement issued yesterday by Penn State:

The new smartphone app for the iPhone, iPod, and iPad gives anyone the power to explore an area at the forefront of comparative biology and to find his or her place in the timetree of life ...

Timetrees are used widely in research in evolutionary biology ... Astrobiologists and geologists also use timetrees to study how life arose and diversified and how organisms affected the Earth's environment, including the atmosphere, throughout time.

"One of the most important things about this knowledgebase," says Timetree scientist Sudhir Kumar, "is that it makes it possible for anyone to see the current agreements and disagreements in the field - immediately."

As far as our user tests have been able to determine, Timetree does not reveal one disagreement regarding evolution which is now becoming prominent in US politics: namely the issue of whether or not evolution actually happens or has happened. Religious hardliners on the American right are known for espousing the view that actually it doesn't and didn't, and that the various species were all created by God during one week just a few thousand years ago.

For instance the newly-selected Republican candidate to represent Delaware in the US Senate, Christine O'Donnell, has stated that evolution is no more than a "theory", here clashing violently with the App Store control freaks.

One major factor in O'Donnell's rise to prominence is thought to have been her endorsement by Sarah Palin, eccentric former governor of Alaska and Republican vice-presidential candidate in the recent election which put the Obama administration into Washington. Palin has said that "I am a proponent of teaching both [creationism and evolution in schools]".