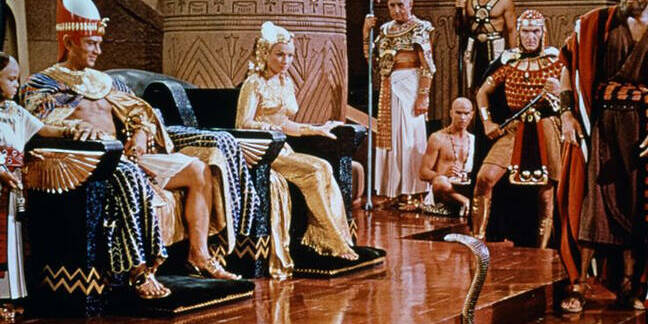 Computer-modelling scientists say that there may be a factual basis for the passage in the Bible where God parts the Red Sea in order to allow through Moses and the Israelites and then allows the waters back again to drown the pursuing forces of Pharaoh.

According to top boffins based at the US National Centre for Atmospheric Research (NCAR), the phenomenon of "wind setdown" - where strong winds can push water away from one place to pile up elsewhere - could have caused events similar to those described in the Book of Exodus.

According to the King James Bible, Moses and the Israelites were overtaken by Pharaoh with "six hundred chosen chariots" and other forces while encamped "by the sea, beside Pihariroth, before Baalzephon". The account goes on to say:

And Moses stretched out his hand over the sea; and the LORD caused the sea to go by a strong east wind all that night, and made the sea dry, and the waters were divided.

And the children of Israel went into the midst of the sea upon the dry: and the waters a wall unto them on their right hand, and on their left.

And the Egyptians pursued, and went in after them to the midst of the sea, all Pharaoh's horses, his chariots, and his horsemen ...

And the LORD said unto Moses, Stretch out thine hand over the sea, that the waters may come again upon the Egyptians, upon their chariots, and upon their horsemen ...

And the waters returned, and covered the chariots, and the horsemen, all the host of Pharaoh that came into the sea after them; there remained not so much as one of them.

The given location has been translated variously, but the commonest assumption is that it refers to the Red Sea. However previous studies have indicated that it would require hurricane-force winds and a highly unlikely seabed layout for the scenario to play out as described there.

NCAR boffin Carl Drews and his colleagues say that it's much more credible that in fact Moses and the fleeing Israelites were encamped just south of the Mediterranean. Oceanographers have calculated that an ancient branch of the Nile River, the Pelusiac Nile, flowed into a coastal lagoon then known as the Lake of Tanis. The two bodies of water would have come together to form a U-shaped curve.

Assuming that the location existed as described, the east wind would have needed to blow only at 63 mph for 12 hours in order to push water back into the Pelusiac Nile and the Lake of Tanis, so exposing a 2-2.5 mile land bridge formerly covered by waters six feet deep. Once the winds ceased, water would have rushed back with the force of a tidal bore, with probably fatal consequences for anyone remaining on the exposed bridge.

“The simulations match fairly closely with the account in Exodus,” says Drews. “The parting of the waters can be understood through fluid dynamics. The wind moves the water in a way that’s in accordance with physical laws, creating a safe passage with water on two sides and then abruptly allowing the water to rush back in.”

The new research could be seen as indicating, for those disinclined to believe in divine aid but inclined to take the Old Testament as an accurate record, that in fact the Israelites were not the favoured of God - just really, really lucky with the weather.

Drews and his colleague Weiqing Han describe their research in a paper, Dynamics of Wind Setdown at Suez and the Eastern Nile Delta, published free online by PLoS ONE. Computing time for the sims was supplied by the US National Science Foundation. ®

VIA takes Eden CPU to 1GHz

Supported by quantum storage that works at room temperature

Got an iPhone or iPad? LOOK OUT for MASQUE-D INTRUDERS