A chanticleer for efficiency

If you happen to be driving towards Buffalo, New York and you spy some big ole commercial-grade chicken coops in the town of Lockport, those aren't chicken coops. They're Yahoo! server coops, the most efficient data centers the company has built thus far.

As El Reg reported a little more than a year ago, Yahoo! had selected the Lockport site for its newest $150m data center so it could feed its servers with the carbon-free hydroelectric power that is generated from Niagara Falls. The New York Power Authority, which runs the hydropower generation in western New York and which has Niagara Falls as its main generating facility, guaranteed a total of 15 megawatts of hydropower to Yahoo! at a price that was estimated to save the Internet giant around $100m over a 15-year period.

That is real green (as in greenbacks) as well as real green (as in saving the planet from carbon dioxide and other forms of hot air). And speaking of hot air, the Buffalo area doesn't have a lot of it, which makes it perfect for an air-cooled data center like Yahoo! has build in Lockport. 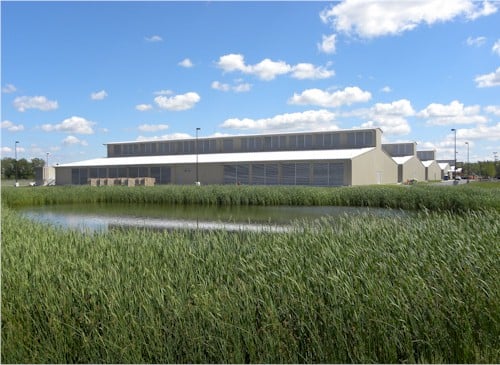 Down on the server farm with the Yahoo Compute Coop

After Yahoo! had committed to building the Lockport facility, the US Department of Energy, seeking to splurge the Obama Administration's economic stimulus money, spread around $47m in cashish to help make data centers and telecommunications facilities more energy efficient; partners with the DOE kicked in another $70m in matching funds. Yahoo! got $9.9m in funding to help defer some of the costs of the Lockport data center.

The Yahoo Compute Coop is designed with open walls and to take advantage of the ambient air temperature and the natural airflow that the chicken coop design brings. Take a gander (or a rooster, as it were) at this closeup shot: 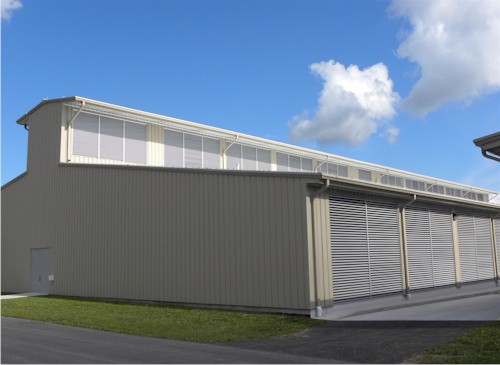 The Compute Coop: Almost like sitting your servers outside

Each of the Compute Coops measures 120 by 60 feet, and the open air walls, moderate temperature, and steadily blowing wind in the Buffalo area allows for outside air to cool the coop 99 per cent of the time during the year. Sometimes, Yahoo! will have to fire up some alternate cooling to keep the servers from melting. Yahoo! reckons that the Compute Coops have a power usage effectiveness (PUE) rating of about 1.08. PUE is the ratio of the total power used by the data center divided by the total power supplied to the computing equipment, and is a measure of how efficient a data center design is. And that is a very respectable PUE that is running up against the laws of thermodynamics.

Next page: No chickens, no hogs
Page: