Mozilla Labs is touting a phone-of-the-future that would project a keyboard onto tabletops and read keystrokes with infrared sensors.

With a Friday blog post, Mozilla's research arm unveiled a concept smartphone dubbed Seabird. Cooked by New York-based designer Bill May, it's billed as "an experiment in how users might interact with their mobile content as devices and technology advances [sic]." Most notably, when attached to a desk dock, it would use built-in pico projectors to provide not only a virtual display but a virtual keyboard and a virtual touch pad as well. 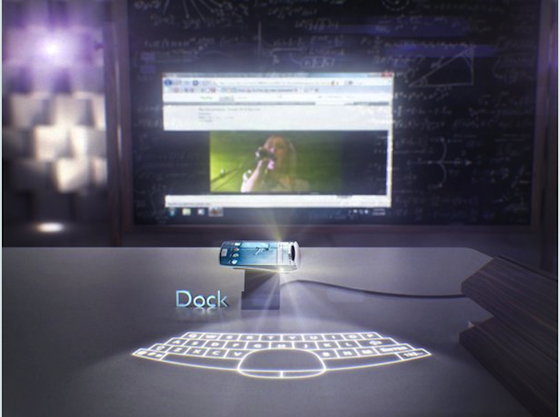 "The Seabird, on just a flat surface, enables netbook-quality interaction by working with the projector’s angular distortion to deliver interface, rather than content, " Ray writes, in the sort of English only a designer could type. "With the benefit of a dock, each projector works independently and delivers laptop levels of efficiency.

It also imagines a "multi-use dongle" — a contraption that pops out of the phone to serve as not only as a Bluetooth headset but also as an infrared controller than can move around 3D as well as 2D interfaces. "Seabird imagines how a multiple use dongle might augment the crowded gestural interface with greater precision and direct manipulation of content in 3D space," Ray continues.

Mozilla has no intention of getting into the phone business. It prefers to concentrate on making browsers for phones. But it likes to dream as well. "I'd buy this phone," says Mozilla director of community development Asa Dotzler. ®