US mainstream media is Apple's bee-atch

A year-long survey has shown that Apple is the mainstream media's darling, and that coverage of the glories of the digital wonderland edged out stories about its seamy underbelly.

"[Apple] attracted more coverage from the mainstream press than any other technology company — and the bulk of it was positive," concludes a study by the Pew Research Center's Project for Excellence in Journalism. "Its popular devices and orchestrated PR strategy helped it even outpace Google Inc."

The survey also showed that "messages about the promise of technology making life easier and awe about new gadgets have vied in the news with worries about privacy, child predators, shrinking attention spans and danger behind the wheel."

In that contest between good and evil, the mainstream US media came down on the side of good — but not by much. Of the eight story themes that the study, well, studied, four were positive and four were negative — and the positive stories outscored the negative ones by 30.2 per cent to 26.8 per cent.

And, yes, that only adds up to 57 per cent, but that's because the researchers identified no clear thread in the remaining 43 per cent of the stories — you can find a breakdown of all of the study's topline results here.

Among the companies mentioned in the 437 technology-related stories that Pew Research studied, Apple was the clear winner with 15.1 per cent of coverage. Google was second with 11.4 per cent, and the once-dominant Microsoft was mentioned in a mere three per cent of stories, even though the period of the study, June 1, 2009 through June 30, 2010, saw the release of Windows 7. 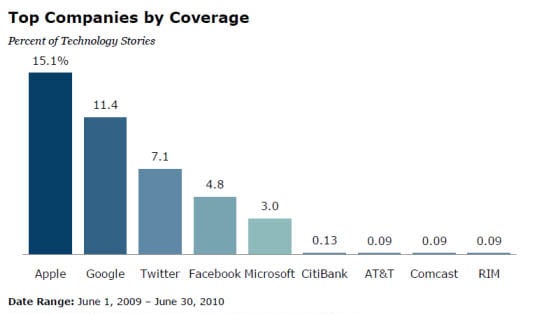 Apple's "popular devices and orchestrated PR strategy" were successful in garnering the company overwhelmingly positive coverage. When the Pew Research Center tallied up positive and negative comments about Jobs & Co, the news was good for Cupertino: when stories discussed such matters as whether Apple is anti-competitive, makes over-hyped or over-proiced products, or whether it "creates products that people don't really need," the mainstream media were in Apple's corner. 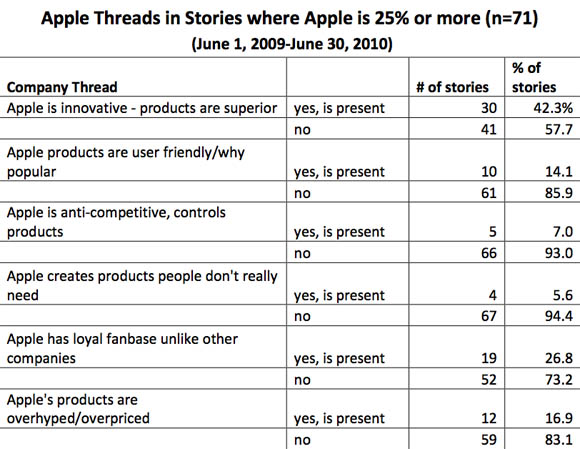 Although Google's coverage was also generally positive, it appears that Mountain View's Reality Distorion Field™ isn't quite as powerful as Cupertino's. That said, despite complaints by news outlets that Google News is profiting by linking to their journalists' original content, only one story during the survey period was concerned with whether "Google steals others' content and ideas."

That question, of course, came up quite a bit in the tech and journo-centric media, but it was apparently of little interest to editors and writers in the mainstream media.

If, by the way, you want to check out which news outlets that Pew defined as "mainstream" and included in their study, you can check out the study's methodology here — where you might be surprised to discover that conservative überbloviator Rush Limbaugh, a known Apple fanboi, made the cut. 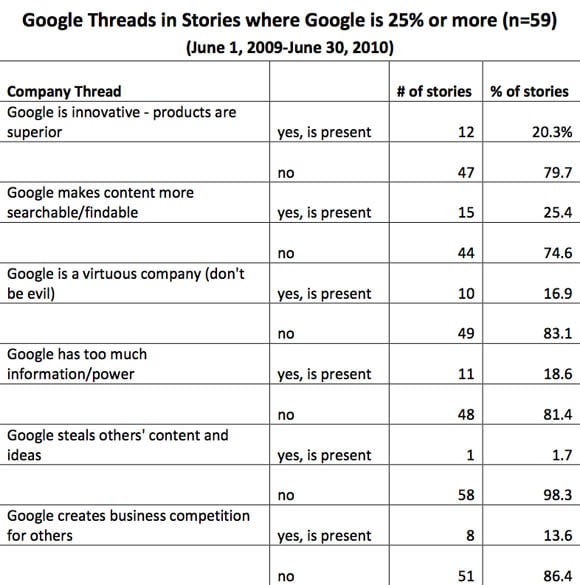 Overall, the top tech topic of the year was the dangers of texting while driving, showing up in 8.5 of the tech stories studied. However, Apple's iPhone 4 and iPad took second and fourth place for a total of 11 per cent — those tweeting Iranian protesters, by the way, came in third at 5.3 per cent.

Love him or hate him — there seems to be little sentiment in between — you must tip your cap to Steve Jobs for an unbroken streak of masterful media manipulation since his return to Apple in the late '90s. ®

Of all the coverage of the Pew Research study, we congratulate All Things Digital for the most spot-on headline: "This Just in From the N.S. Sherlock Institute for the Bleeding Obvious: Media Likes Covering Apple."