Raising the roof on the shingled write problem

The problem stems from the layout of heavily overlapped tracks in shingled write recording (SWR) and the direction of writes. Together they mean that a random, in-place replacement of data on a single track cannot be done without rewriting the data on adjacent (overlapped) tracks as well, and this takes time, a lot of time in disk access terms.

SWR has been proposed as an interim way forward - one that could be applied to current PMR media and extend its life towards 2-5Tbit/in2. Use of 2D readback and signal-processing could extend it again, such that the combination of this and SWR in Two Dimensional Magnetic Recording (TDMR) could perhaps attain 10Tbit/in2.

(This information comes from an IEEE Transactions on Magnetics, Vol. 45, No. 10. October 2009, and an article entitled "Future Options on HDD Storage", which is only available behind an IEEE paywall. In our view such papers should be openly available and free of charge. It is a disgrace that they are not. )

In SWR a hard disk drive gets more tracks because each track except the innermost ones are overlaid by the next track. The picture shows this effect, with each resulting track having only about a third or less of its width along one edge not overlapped by the adjacent track. The result is much narrower tracks.

The authors of the paper say: "Readback (with a suitably narrow reader) is unconstrained and random-access reads work just as in a conventional drive … Reading a sector from a shingled written surface may have conventional performance." 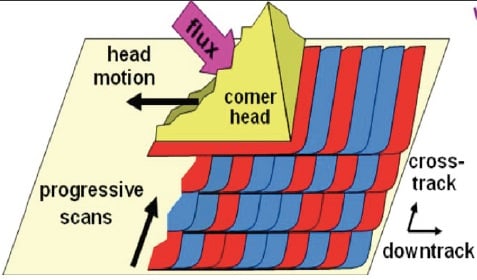 The next sentence reveals the problem: "A huge disadvantage is that 'update-in-place' is no longer possible."

What do the authors mean? They write: "Tracks are written sequentially in one direction cross-track. Therefore, a single track or portion of a track cannot be altered without first recovering many tracks of subsequently written data."

It's obvious, isn't it? If you replace and re-write the data already on a track A, which has 75 per cent or more of its width overlaid by two or three other tracks (B and C), then a write to part of track A obliterates the data on the overlapping parts of tracks B and C as well, because you write in the full track width while reading in the narrow track width. This asymmetry is the issue.

Put it another way; will enterprises buy shingled HDDs if rewriting data takes seven or eight times longer than with today's drives? Of course they won't. SWR drives won't find a place in applications where fast write I/O is a requirement. Some commentators think the only place they will find an application is inside the slow write world of personal video recorders (PVRs).

What can be done to fix this? The authors of the paper suggest adding in two-dimensional readback and signal processing technology, and using firmware techniques such as those needed to overcome the block erase-write cycle delays in solid state drives.

The authors state: "For 2-D readback, powerful signal processing can be applied that takes advantage of knowing the waveforms on the adjacent tracks. A highly accurate track following system will also be applied to deliver the required spatial resolution."

As well as: "By applying firmware similar to [the SSD firmware above] TDMR should be able to offer a standard HDD interface supporting small random writes and deliver write performance comparable to today's HDD by dynamically remapping written sectors to append to the most convenient band of shingles. If multiple adjacent tracks must be read to recover a sector, very effective buffer caching will be needed to mask the large latency of such reads."

In more detail TDMR needs readback signals to be available from several adjacent tracks so that a 2-dimensional waveform or image can be constructed. This waveform has powerful 2-D coding and signal-processing applied to it and this takes account of, if not advantage of, inter-track interference. Gaining the information from adjacent tracks means a multi-track reader or progressive scans with a single head, meaning extra time will be needed for the extra three to five disk rotations involved. A lot of research is needed to see if this approach is viable.

If this approach is used then additional system memory will be needed, meaning extra cost, and more cost still will come from using a full 2-D readback process.

It's apparent that although shingling is less expensive to develop than BPM or HAMR, it is not an easy option. But shingling and full TDMR can be applied to both BPM and HAMR media as well as the current media, so once suppliers know how to do it they can continue using the technology. ®

Torrenting is still a thing, it still works, and if streaming vendors get mean, it's still an option
Applications8 Feb 2023 | 2

Facebook parent could then offer that data to other advertising clients, complaint alleges
Applications8 Feb 2023 | 2

Opinion As Google and Microsoft make us all AI consumers, remember that to err is human, but to really mess things up at scale takes a computer
AI + ML8 Feb 2023 | 9

So much for the workers' paradise: Big Tech gives its discards months of severance pay
On-Prem8 Feb 2023 | 15