Bicycle trade organisations have commissioned a satnav app that, they claim, steers cyclists away from busy roads and shortens journey times.

The Bike Hub Cycle Journey Planner shows bicycle-friendly shortcuts that avoid traffic congestion and gives priority to downhill routes. A bike shop locator displays directions to traders within a six mile radius, and you can call on the app to find London Cycle Hire Scheme stands. 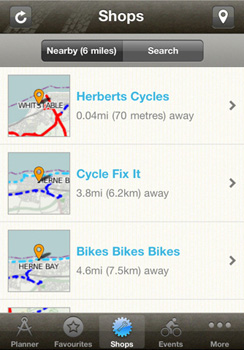 Produced for the Bicycle Association of Great Britain and the Association of Cycle Traders, the iPhone app is already hugely popular on iTunes - it remained in the top three free navigation apps all weekend.

The app includes articles on cycling, road laws and safety precautions, which are of particular note as the app is specifically designed to improve the welfare of cyclists and limit the number of accidents.

Maybe it'll encourage London cyclists to obey traffic lights, but , cynical pedestrians that we are, we doubt it.

The routes are calculated using data from CycleStreets of Cambridge, a community-based not-for-profit group that uses mathematical graph theory algorithms to calculate paths. Mapping is provided by OpenStreetMap, a community of 300,000 enthusiasts worldwide who collaborate to produce up-to-date maps.

A future update of the Bike Hub app is set to incorporate turn-by-turn directions.

The Bike Hub app is available free from the App store. ®