Review The Olympus LS-5 is a solid-state stereo audio recorder with 2GB internal storage and support for SDHC card expansion up to 32GB. About the size of a domestic phone, it looks the business and also looks strikingly similar to the LS-10 Reg Hardware reviewed a couple of years ago. Indeed, the blue hue of the LS-5 is really the only giveaway here.

So what’s the big noise about this recent addition then? As far as spec comparisons go, blink and you’ll miss it. The two recorders are pretty much identical in terms of operation and performance. The chunky built-in angled stereo mics can capture uncompressed WAV audio at 96kHz with a 24-bit resolution dropping down incrementally to 44.1kHz/16-bit.

For longer recording times, MP3 recording is available at 320, 256 and 128kbps. And if you really need to push it, there’s WMA at 160, 128 and 64kbps. New with the LS-5 though, is mono recording. This slices the file size in half, effectively doubling the recording time. Choosing mono will record the lowest resolution for the selected file format, alas, you can’t notch up a 96kHz/24-bit file in this mode, but with the internal storage alone, you can record for 26hrs 40mins in WMA mode, but would you ever listen back?

The LS-10 has a remote control as standard now, but the LS-5 goes without. It doesn’t include the protective zip-up pouch or Cubase 4 LE either, but instead comes with Sonority – Olympus’ own content management and audio editing application. As the modus operandi of the LS-series really owes a lot to the rather less ambitious voice recorders Olympus produces, don’t get too excited about Sonority. 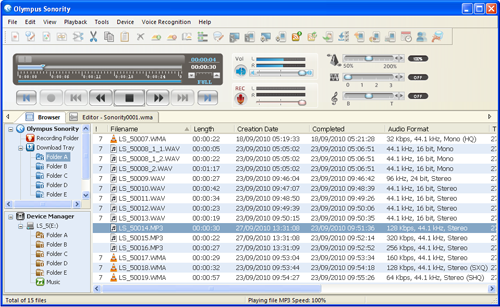 Still, it’s interesting to see that Olympus decided to go the extra mile with this application, as it supports both Macs and Windows PCs. A significant feature of the LS-5 is the device’s USB mode options: Storage and Audio. With the former, Sonority can access LS-5 files and transfer them – on the Mac, the internal storage also appears on the desktop, if you prefer to simply drag and drop.