Apple's Cook not jumping to HP

Tuesday morning, a rumor popped up that Apple COO Tim Cook was to become HP's CEO. Apple's stock took a beating. And Tuesday afternoon, the rumor was denied.

"Tim Cook will not be going to HP, he loves Apple," a well-placed source told Barron's Tiernan Ray after talking with Cook over coffee a few miles north of One Infinite Loop. 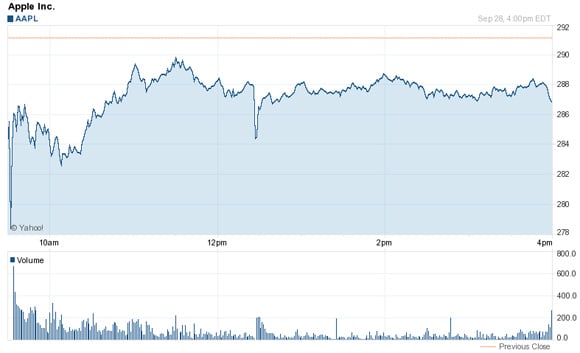 It was a wild 'n' wacky day for AAPL

Perhaps in response to the rumor, perhaps prompted by sell-off algorithms in computer-trading software, or perhaps simply as a result of the skittishness in the US economy in general, Apple's stock took two sharp drops in the day's trading — a haymaker as soon as the market opened, and a jab around 12:30.

"Rumors, games, or what?" Seeking Alpha contributor Karl Denninger blogged, adding: "Folks, this sort of crap is totally out of hand."

Taylor summed up the recent market freakishness by saying "Even to seasoned market observers, sudden price moves in stocks don't always have explanations that are immediately obvious. Careful out there!"

And as for Cook? As is the case with every rumor that crashes through this volatile industry, only the principals know the truth. ®