War inevitable if advanced life present, thanks to Bebo 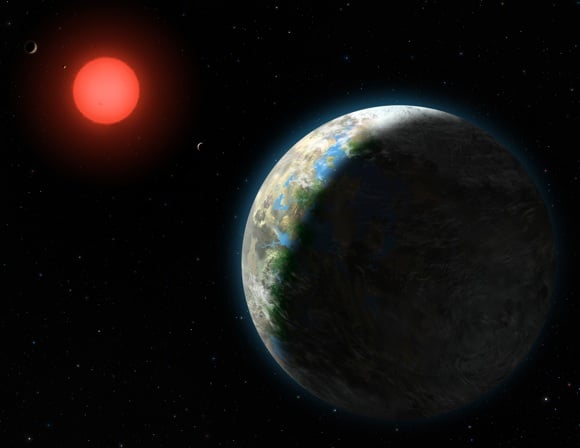 What's this barbaric rubbish on the interstellar band? It's coming from that G-type over there, you say, Commander? Despatch a volley of krenon torpedoes immediately

The star in question is Gliese 581 in the constellation Libra, whose planets have been in the scientific news for some years now. In particular, boffins have tended to focus on the planet Gliese 581d, which has around seven times the mass of Earth. It lies at such a distance from its dim, red M-class sun as to make it pretty cold, but some scientists say that if conditions on the surface are right liquid water could perhaps exist there.

Now, however, a team of boffins from the Lick-Carnegie Exoplanet Survey have brought a new method into play: that of measuring tiny movements of the star in response to gravitational pulls upon it by its orbiting planets. Compiling 11 years' worth of radial velocity measurements of Gliese 581, the scientists say they have found two new planets, Gliese 581 f and g. It is Gliese 581g, massing about three times what Earth does, that is of interest:

The estimated equilibrium temperature of GJ 581g is 228 K, placing it squarely in the middle of the habitable zone of the star and offering a very compelling case for a potentially habitable planet around a very nearby star.

The given temperature of 228 Kelvin equates to 45 degrees below zero on the everyday Celsius scale, but the Carnegie scientists believe that surface temperatures would average between -31°C and -12°C. As it is very close to its parent star, the planet is liable to be tidally locked - with one face constantly turned to its primary, as the Moon is to Earth here in our solar system. This would lead to blazing heat on the bright side and freezing chill on the dark, and bands of intermediate temperature in between.

Though much more massive than Earth, Gliese 581g is also assessed as being perhaps half again as big. Thus its surface gravity would be anywhere from 1.1 to 1.7 g - good for holding an atmosphere, and quite feasible for humans to walk about in.

The Carnegie team says that the mere fact of Gliese 581g being found almost as soon as the new radial-velocity boffinry tool was put into use suggests that "eta_Earth", the fraction of stars which have potentially-habitable planets, is likely to be large - "on the order of a few tens of percent". They add:

If the local stellar neighborhood is a representative sample of the galaxy as a whole, our Milky Way could be teeming with potentially habitable planets.

Potentially habitable but as yet uninhabited worlds would be great, as soon as humanity can master the various technical issues involved in star travel (just getting past low orbit seems to be beyond us at the moment). The human race could spread out across many planetary homes, and so finally achieve a decent chance of long-term survival (if we don't manage this, we're certain to be wiped out at some point in an unfortunate asteroid or comet strike, global war, climate change or something).

Of course, habitable worlds might also be inhabited by life more complex than the microbial forms which have been all there was on Earth for almost all the time it has been a living planet. In the case of Gliese 581, the presence of advanced intelligent life would be a disaster for humanity.

Next page: If there are advanced aliens at Gliese 581, we have already offended them seriously
Page:
Corrections Send us news
114 Comments