Get your engines revving

Review Reverse is a gear not often associated with Formula One, a sport entirely focused on hurtling forwards at breakneck speeds of up to 220mph. But it's one the sport had to engage in recent seasons to reverse a seemingly inexorable decline in popularity. 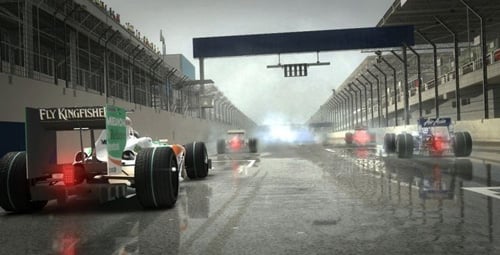 Going off grid - the revolutions begin

Several factors combined to lift F1 out of its decade-long doldrums. First, The Schuminator retired. Then, in 2009, the sport introduced its most wide ranging and impactful rule changes since 1998. At the same, the credit crunch and threat of team budget caps significantly reduced the chasm between team finances.

What greater tribute, then, to the reinvigorated sport than Codemaster's F1 2010, arguably the greatest Formula One videogame of all time.

That it can't contest the title of greatest overall driving game is understandable. Despite the recent improvements, Formula One still suffers inherent limitations. Races remain largely processional, results almost always determined by pit stop strategies, car set-ups and mechanical failures rather than by driving ability. Although at their closest for many years, the disparity in team resources maintains a gulf between F1's elite and the rest of the field. And the limitations of a single car series can never compete against the wider range of car handling and garage car-porn of freer titles, such as Forza and Gran Turismo.

These shortcomings are, of course, firmly outside of Codemasters' control. Rather than dwelling upon what F1 doesn't do, Codemasters has concentrated efforts to capture the essence of a sport in a way few other titles manage.

Next page: The graphics are breathtaking
Page:

who, me? No crypto needed, just a project with a tough deadline that nobody minded missing
Software5 Dec 2022 | 37

Hosting company has nothing to say on data loss, restore times, or root cause
Security5 Dec 2022 | 14