Exclusive Security chiefs have cautioned army, navy and RAF personnel to disable Facebook Places, over fears it could be used by terrorists to identify and track targets.

The new service could act as a "one stop shop targeting pack", particularly in Northern Ireland, they warn. 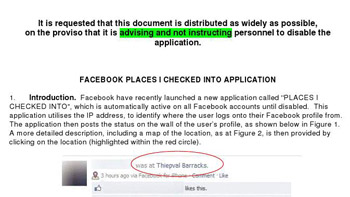 The Ministry of Defence is concerned about how it could be used by dissident Republican groups to gather intelligence on operations, as well as on the family and friends of personnel.

Facebook Places encourages members of the dominant social network to publish their location and was launched in the UK two weeks ago. Users do not necessarily have to actively use the service for their exact location to be widely shared.

An MoD advisory document about the potential threat is being circulated to military and civilian personnel in all three forces. It provides step-by-step instructions on how to disable Facebook Places using privacy settings, which it urges, although does not instruct, them to follow. To complete the lockdown, members of the forces must disable four separate data-sharing features.

"The main concern relating to the use of the application, is that it may inadvertently compromise the locality of a military user," the document says.

"Of significant note, users on operations in Northern Ireland, are potentially putting themselves at risk by drawing attention to their exact whereabouts."

The MoD calls on the forces to turn off a feature of Facebook Places called "People here now". Turned on by default, it means that all Facebook users checked in at a given location will be able to see who else is there, if they have checked in.

"Social networks already provide an extensive open source intelligence gathering tool. This application is almost creating a one stop shop targeting pack, which could potentially be used to target military personnel, family and friends," it says in the advisory, which was written by Whitehall security officials.

They also want personnel to ensure that if they do check in, intentionally or by accident, their location will not be visible to anyone. By default it is shared with their friends.

Facebook Places allows users to not only publish their own location, but also that of their friends, a feature of the service that most distressed privacy campaigners and has also caused the MoD concern. Although Facebook asks users for their permission the first time a friend tries it, the military are urged to block such requests preemptively.

Finally, the advisory document tells users how to stop third-party applications and websites getting access to location data, which by default they can.

A spokeswoman for Facebook said it had developed Places with "unprecedented" privacy controls and that it is the safest such service available. The site's description of the service is here.

An MoD spokeswoman said: "The MoD provides guidance on how to use social media safely and responsibly.

"We have recently provided guidance on the risks of the new Facebook 'Places I Checked Into' application, which provides information on the exact location of Facebook users, and given a step by step guide on how to disable the application where appropriate. Personnel were not instructed to remove the application."