D-Day for pricey 7in Android tablet

However, it didn't say how much the thing will cost. Given that the Tab incorporates a 7in, 600 x 1024 touchscreen, 1GHz ARM based CPU with an on-board PowerVR SGX graphics core, a GPS pick-up, a 3Mp camera, 802.11n Wi-Fi, Bluetooth 3.0 and HSDPA 3G connectivity, you'd expect that it won't come cheap. 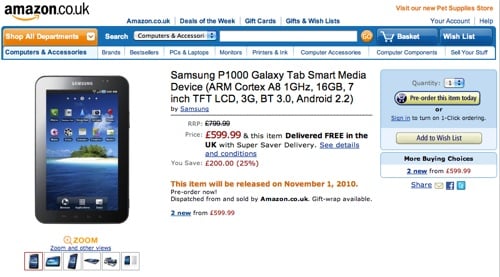 Fortunately, most online retailers are listing it around the £600 mark.

Samsung re-iterated its plan to sell the Tab not only through retailers but also mobile phone networks, though neither Vodafone nor Three have yet to say what they'll charge for the tablet when bundled with airtime.

Carphone Warehouse and Dixons stores will be selling the Tab too.

Not all the Hubs will be available in the UK. The Music Hub, powered by 7digital, probably will be, but the Media Hub appears for now to be US-only. ®