A Tory alarmist is squawking about the technology behind an iPhone app that he claims could enable an airline-hunting terrorist to more easily stalk his prey.

"Anything that makes it easier for our enemies to find targets is madness," Tory MP Patrick Mercer told the Daily Mail. "The Government must look at outlawing the marketing of such equipment."

Yes, that Patrick Mercer — the same worthy who warned of explosives in terroristic breast implants, and of HIV-infected needles in Taliban bombs. Incidentally, he's also the man claimed to have stuck his mistress with an £8K bill for flat-refurbishment, and the character who was sacked by David Cameron for alleged racist remarks. 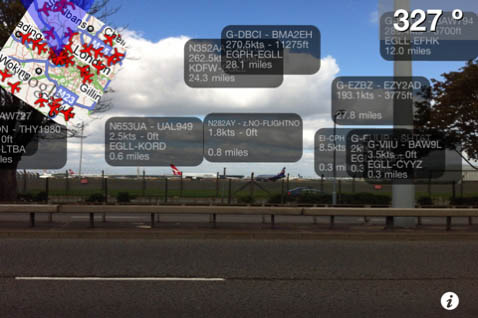 Plane Finder finds targets aplenty in and around Heathrow

The target of Mercer's condemnation is the technology behind Plane Finder AR, which uses data from the publicly available Automatic Dependent Surveillance — Broadcast (ADS-B) system that airlines are deploying to improve flight tracking and traffic control.

Plane Finder uses that data to provide an augmented-reality display of a commercial flight's number, registration, speed, altitude, and distance when a handset's camera is aimed at an airliner either parked or in flight.

And a terrorist needn't be concerned with juggling his FIM-92 Stinger while attempting to hold his iPhone correctly in order to get a decent signal. He could also choose either Plane Finder HD for the iPad or just plain Plane Finder for Android.

For that matter, a bad guy could simply buy his own ADS-B receiver for around £200, and hook it up to a Windows box running software such as PlanePlotter. And if the terror-minded miscreant is baffled by the intricacies of a USB A/B cable, he could simply install personal ADS-B software such as AirNav Systems' AirNav Live Flight Tracker, which gets its data online.

Those jihadist jugheads could hardly put together a system as intricate as that used by Plane Finder's developer, Pinkfroot, which gathers its data from a network of ADS-B receiver–equipped aircraft enthusiasts and compiles it into a central database that's accessed by its apps.

All the data is open to the public — although if fearmongers such as Mercer continue to stoke public sentiment, it may not be for long.

"We have packaged information that is freely broadcast," Lee Armstrong, a Pinkfroot director, told the Daily Mail. "We haven't had any objection from the authorities in the UK or anywhere else in the world."

The UK Department for Transport isn't particularly worried, either. A spokesman told the Daily Mail: "This application might be new but the ability to track aircraft isn't."

Finally, it is to be noted that according to many of the Plane Finder reviews in the iTunes App Store, the only terror attacks engendered by the app are bugs and a cascade of error messages.

In sum, it appears highly unlikely that Plane Finder will hatch heinous-halfwit havoc. The hullabaloo over the app has merely resulted in more ink for Mercer and free publicity for Pinkfroot. ®