The Royal Navy's new £1bn+ Type 45 destroyers, which have been in service for several years (the first is already on her second captain), have finally achieved a successful firing of their primary armament. 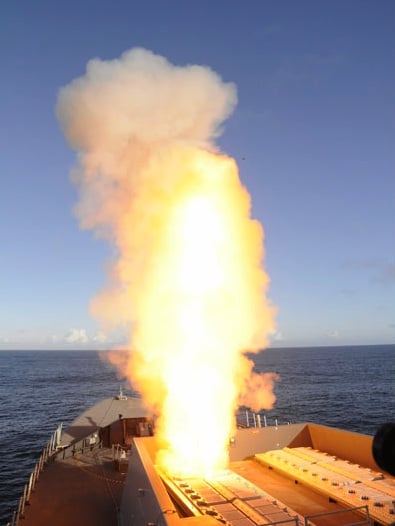 It worked this time, honest.

The Ministry of Defence (MoD) announced yesterday that HMS Dauntless, second of the class, has made the first firing from a Type 45 of the French-made Aster missiles with which the ships are armed. All previous trial shoots were carried out using a test barge at French facilities in the Mediterranean.

According to the MoD:

The system successfully fired an Aster 30 missile from HMS Dauntless at the MOD range in the Hebrides and hit a moving target drone.

"Both my ship's company and the equipment manufacturers have done a sterling job," commented Dauntless' captain, Richard Powell.

"This ... is the culmination of much successful co-operation between MOD and industry," added Major General Garry Robison of Naval Command Headquarters*.

It's possible to take a different view of the excellence (or lack of it) shown by the people providing the Type 45s' missile system, which was originally supposed to enter service three years ago. It is now expected to achieve full operational capability in 2011, four years behind schedule, following multiple test failures. The underlying problems, traced to production faults in the Aster missiles, are now thought to have been rectified.

Contradicting Captain Powell and General Robison somewhat, the MPs of the Public Accounts Committee last year described the progress of the project, officially known nowadays as "Sea Viper", as "disgraceful". The MPs wrote:

Although the Type 45 will enter service in 2009, it is a disgrace that it will do so without a PAAMS missile having been fired from the ship, and will not achieve full operational capability until 2011. Other equipments and capabilities which will enhance the ship's ability to conduct anti-air warfare operations will not be fitted until after the ship enters service in some cases.

Next page: Hey, but it can knock down supersonic shipkillers! Well no, we haven't actually tested that as such ...
Page: