"Ūmi telepresence is about you and me connecting in new ways, right in your living room," Cisco's emerging technologies group headman Martin De Beer told his audience of press and analysts at the system's roll-out Wednesday in San Francisco.

The ūmi telepresence set-up consists of a settop box, a panning-and-zooming 1080p camera and microphone unit that sits on top of your HDTV, and a simple IR remote (which can also control panning and zooming). You supply the HDTV and the broadband connection. And the living room. The setup runs $599, and the required service is another $24.99 per month for unlimited video calls.

But despite that track record, ūmi telepresence is quite different from Cisco's enterpise offerings, De Beer insisted. "This experience that we've created is very specific to the consumer itself," he said. "It is different, it is a new class of product, and you will see that the experience is transformational.'

How transformational? Ūmi is übertransformational, from De Beer's point of view? "Very, very soon you are going to see us virtualize services into the home — just like e-commerce virtualized with the advent of the browser — in ways that will enable the delivery of healthcare, education, government services," he said.

De Beer sees ūmi telepresence — and, of course, its follow-ons and imitators — as turning users into all-consuming couch potatoes. "Think of customer service right into your living room," he said. "So you don't have to drive down the street to meet with your doctor, accountant, lawyer, or tutor. You can hire them from wherever they are — that French tutor may in fact be living in Paris — and bring them into your home, to consume those services."

De Beer's comments, however, perhaps unintentionally exposed a flaw in the system. When speaking of how to "build trust and emotional connections long-distance," he said that Cisco's experience in business telepresence had taught the company that "if you don't have that full HD, 1080p experience in life-size, full immersion, you can't see the expression in someone's eyes to build trust and build a relationship — and the same will be true even more so with this solution into the home."

Problem. To achieve full 1080p performance, ūmi telepresence requires a 3.5Mbps broadband connection both up and down. If your connection is 1.5Mbps up and down, you'll get 720p video. At lower rates the system will drop back to 480p.

This bandwidth hunger is undoubtedly one reason that Cisco will be partnering with Verizon in early 2011 to install ūmi telepresence systems in the homes of customers who subscribe to Verizon's all-optical FIOS network. 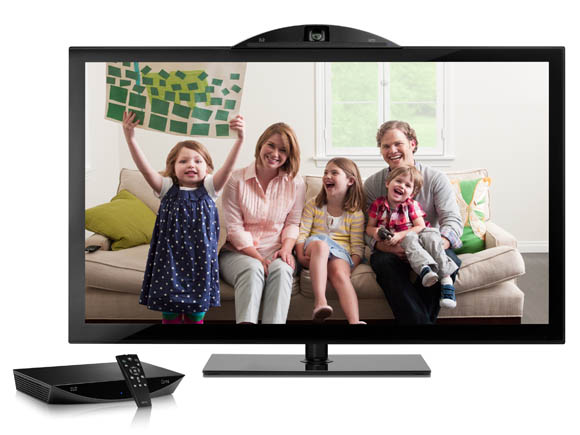 In addition to simply making video calls using a straightforward, consumer-friendly interface, the ūmi telepresence system can be used to record videos, then email them or upload them to Cisco's flipshare, Facebook, or YouTube.

Although the full "transformational" experience would be ūmi-to-ūmi, video calls can also be made to and from webcam-equipped PCs or Macs using Google video chat. A video-message capability is also included, complete with — as is to be expected — personalized "I'm not here, leave a message" videos. Messages can be checked when away from home using a browser-based service, and text notifications of messages can be sent to your smartphone.

It remains to be seen, of course, whether ūmi telepresence can attract enough users to give it the critical mass it needs to achieve "tranformational" status. But Cisco has promised a serious marketing push to get its ūmessage to the masses.

"It's like chocolate," De Beer said. "If you haven't seen it, if you haven't experienced it, it's just so tough for me to tell you what it's like — you've got to taste it yourself."

And so Cisco will launch a mall tour that'll offer ūmi taste tests at over 20 US malls beginning November 10 — the system, by the way, will ship on November 14, and pre-orders are available now. The system will be sold at Best Buy's Magnolia Home Theater stores, where curious customers will presumably also be able to get a tasty nibble.

In addition, the ūmi telepresence system will be used to bring remote guests onto the final season of The Oprah Winfrey Show, and promoted in a series of commercials starring cute-as-a-button actress Ellen Page.

As we all learned from The Jetsons, consumer-level video teleconferencing is a well-nigh inevitable feature of our shared future in the digital wonderland. Whether the Cisco ūmi telepresence system will usher in that transformational transformation remains to be seen.

But with its networking skills and deep marketing pockets, Cisco is in a good position to grease the skids. All that ūmi telepresence needs — besides that aforementioned critical mass of early adopters — is a killer app that'll make it a must-have device.

Yup. That's the one we're thinking of. ®