But the two-carrier RN would be smaller than the Italians! Oh noes! (Also enormously more powerful, but let's not mention that)

Catapults would make the ships somewhat more expensive, but not much: their electric transmissions can furnish the necessary 'leccy with ease as they stand. And catapults would allow the purchase of much, much cheaper and better planes, as we've discussed on these pages before. The MoD might even choose to buy ordinary non-stealth F-18 tailhook planes, long in mass production and operated by the US Navy and other air forces round the world in huge numbers. 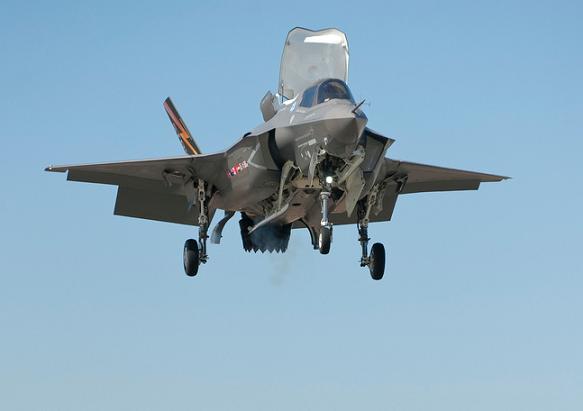 Nice - but a bit on the fiddly side, frankly

Stepping away from the F-35 would upset the Americans, but a vague promise to get some F-35C tailhook planes at some point would probably satisfy them - the Pentagon wants to keep the UK on board with the F-35 not for the relatively paltry number of planes it will buy, but simply to avoid negative publicity for the troubled programme.

The third option, which might be chosen for one carrier, would be to turn it into an amphibious-assault ship, carrying helicopters and marines rather than jets. This would be even cheaper than a bare-bones jumpjet carrier, and there would be no need to find any jets or radarcraft at all.

The Telegraph's sources think that this is on the cards, saying that "ministers have discussed reconfiguring the first new carrier as a helicopter platform that would also carry Royal Marine commandos. The carrier would then ultimately replace the existing helicopter ship, HMS Ocean".

This is a foolish plan, however. HMS Ocean is new: she doesn't need replacing. Furthermore, having only one proper carrier is much, much worse than having two, almost as bad as having none: an enemy need only wait until the sole proper carrier is in a planned refit before becoming aggressive, happy in the knowledge that the UK can't even rattle its sabre effectively in response. (One of the main ways that the USA resolves or responds to tense situations around the world day to day or week to week is to move its carriers about.)

In effect, the amphib downgrade plan sacrifices a hugely important and powerful carrier - gives up the critical one-carrier-always-up capability - and throws away the perfectly good HMS Ocean, which was actually quite cheap to have anyway (she cost less than a typical escort and her crew is no larger). The only upside here is that one or two more frigates or destroyers are preserved, a largely meaningless gain: the more so as there would now be fewer capital ships actually requiring escorts.

The Telegraph also recycles the usual witless grumblings about "a navy smaller than at any time since Henry VIII" and comparing the total number of ships under the two-carrier plan unfavourably with the fleets of France and Italy. The standard suggestion from the frigate mafia that escorts on their own can somehow "protect trade and sea lanes" is also trotted out.

This is all bilge, to use a nautical phrase. A navy with an arse-kicking fleet carrier always at sea is tremendously more powerful than one without: a two-carrier RN, should it be required to, could easily defeat the Italians out of hand - and the French too, by simply waiting until their one and only carrier is in maintenance. The number of floating tin cans possessed by either side is a complete non-issue.

Next page: To believe that frigates are as cost-effective as carriers, you pretty much have to accept that the Earth is flat
Page: