A US military contract announcement suggests that the UK Ministry of Defence still plans to purchase the F-35B stealth jumpjet for operations from the Royal Navy's new aircraft carriers. Lockheed, maker of the aircraft, has received an $18m deal to integrate the UK-developed "Shipboard Rolling Vertical Landing" (SRVL) method into the new fighter. 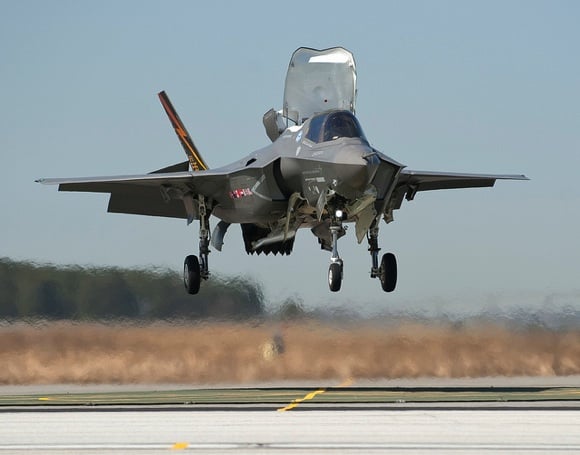 See those things on the sides? They could be handy

According to the US announcement, made last week and flagged up first by Flightglobal.com, Lockheed will be partnered with the UK side of BAE Systems plc for the task of ensuring that the F-35B can get down on a ship at sea using SRVL. BAE is already involved in development of the jet, and in fact the lead test pilot for the F-35B, Graham Tomlinson, is a BAE employee.

The idea of SRVL is that the F-35B will not set down vertically supported solely by thrust from its lift fan and downward-swivelled jetpipe. Rather it will come down still moving forward slowly, supplementing the vertical thrust with lift from its wings. The forward speed would still be slow enough that there would be no need for arrester wires and a tail hook.

This should allow an F-35B to set down on a carrier deck while carrying a larger amount of fuel and weapons than would normally be possible. The Royal Navy is well-known to be anxious about this issue as it led to the early departure of the late, great Sea Harrier fighter.

The Sea Harrier had been upgraded in the early 1990s to carry heavy AMRAAM missiles, making it probably the UK's most powerful fighter at the time (bearing in mind that the the only other contender then was the lamentable Tornado F3). In the cold northern seas where the RN had expected to operate against the Soviets, the upgrade worked.

In hot weather, however, jet engines lose thrust and the Sea Harrier was unable to make a vertical landing with AMRAAMs still aboard and a safe margin of reserve fuel. Thus, for fighter patrols say above the Persian Gulf, it would have been required to dump its expensive weapons after every flight. This was an unacceptable weakness, and in the end that RN scrapped the Sea Harrier and shifted to operating the bomber-version Harrier used by the RAF.

The F-35B has much more hover power than the Harrier did, and programme officials have repeatedly insisted that it should be able to land vertically with safety fuel and 2 AMRAAMs. Nonetheless, the UK MoD has done trials to develop the SRVL method using a test Harrier and computer modelling.

The Royal Navy is quite sure that it wants to proceed with SRVL for the F-35B. Senior naval aviators have previously told the Reg that it will be the preferred method of landing regardless of the F-35B's eventual performance as it will allow more weaponry or fuel to be brought back to the deck and will also ease maintenance as the jet's engine won't have to be run so much at full redline power in the hover.

Much though the US Navy is listed as the contracting authority for F-35B SRVL, the $18m in question comes from the MoD. However, events may be outpacing the movements of transatlantic bureaucracy.

The F-35B is stalled in flight tests at the moment, as the sole flying example is grounded due to a door hinge issue. The programme was already badly delayed and subject to cost overruns, and it is clear that the price of early F-35Bs to be delivered within the next few years is likely to be ruinously high.

Unfortunately this is just when the Royal Navy will need jets: although it has been delayed, the first of the two new carriers will be delivered in 2014 under current plans. It is widely acknowledged that the MoD, now in the middle of a massive budget-cutting exercise, cannot afford enough jets for the two ships at early-production prices: perhaps not any point in the manufacturing run, the F-35B being one of the most complicated aircraft in the world.

This has led to speculation that the new British carriers may be fitted with catapults so as to allow the purchase of cheaper aircraft. Such speculation has been lent some weight by reports of RN pilots training in catapult launch and arrested recovery landings, and of ongoing electromagnetic catapult work by British firms.

Last week's SRVL announcement would seem to suggest that the original jumpjet plan remains on track: but in fact the length of time it typically takes to organise such a deal and get it approved by the US government is such that it may reflect the thinking of some months ago. ®