Flash-crashing Wall Street is so much more fun now than in the old days, when you had to cause an actual panic over a number of days to cause a crash. And if you're a hedge fund that wants to do super-fast trades to get ahead of the about-to-crash competition, Appro International has just the server for you.

It's called the HF1, short for high-frequency trading — that's a market in which a little bit of extra clock speed is worth burning up a server or hundred to make a couple of extra million or tens of millions of dollars.

John Lee, vice president of advanced technology solutions at the blade and rack server vendor, says that Appro was approached by a number of financial-services companies that are not thrilled about Moore's Law and the effect it has had on clock speed. For many of their algorithms, having extra cores does not help their applications run faster — having faster clocks does.

These financial customers — presumably big banks and hedge funds that are engaged in high-frequency trading — had a bit of PC envy, with gamer workstations being overclocked to give players that extra bit of performance, and asked Appro to create a prototype overclocked server.

The Itanium 9300 and Xeon 7500 processors have clock speeds that are way too low compared to the Xeon 5600 processors used in dual-socket servers; right now, Intel has the clock speed advantage over Advanced Micro Devices, so the choice of processor was relatively easy.

Instead of cramming a two-socket system into a 1U server — you can actually get two half-width two-socket servers using the Xeon 5600s into a 1U chassis these days — Appro had to choose a fatter chassis that would allow for water cooling of the overclocked processors and plenty of airflow to keep components from melting.

The 3U chassis of the HF1 server allows for large heat sinks to be put on memory and other system components and for water blocks to be put onto the processors — just like gamers do on their overclocked PCs. The water blocks mount right onto the chips, as heat sinks do, and have a pump that carries heated water away from the chip, where a large radiator/fan assembly at the back of the server exhales the heat from each processor socket.

The HF1 server is based on Intel's 5520 chipset, and overclocks the six-core X5680 processors to 4.4GHz. These chips normally run at 3.33GHz, with a Turbo Boost frequency of 3.6GHz if a bunch of the cores are not being used. At their 3.33GHz speed, they dissipate 130 watts; Appro has not said how hot they run at 4.4GHz, but Lee said that a normal two-socket Westmere-EP server using the 3.33GHz chips would dissipate about 400 watts of heat and the HF1 pumps out about 1,000 watts.

The minute Appro overclocks an Intel chip, it voids the manufacturer's warranty. At $1,663 a pop, this is not something to take lightly. Appro normally carries a three-year warranty on its servers, but the HF1 server chassis only has a one-year warranty, and Appro is only providing a 30-day limited warranty on the overclocked CPUs since it does not know what will happen if customers run them this hot for extended periods of time.

If clock speed is so critical for these financial services applications, it is a bit of a wonder why Appro and its hot-to-clock customers didn't opt for the four-core Xeon X5677 processor in the Westmere-EP lineup, which has a base clock speed of 3.46GHz. Boosting this chip by the same 32.1 per cent overclock ratio would yield cores running at 4.6GHz — and very likely in a smaller actual thermal envelope.

Lee says that Appro is looking at other processor options for the HF1 server, but that for whatever reason, they wanted six-core, not four-core, Xeon chips. With six-cores running at 4.4GHz, the HF1 server is rated at 211 gigaflops of double-precision floating point performance. 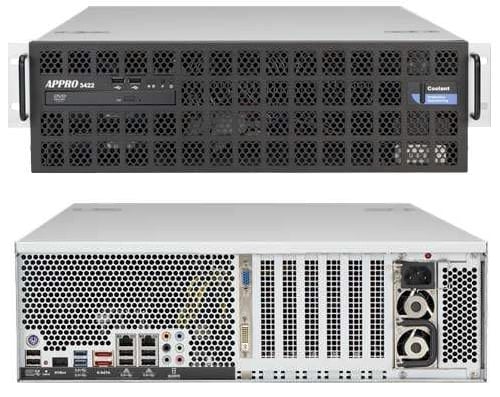 If Intel had sense, it would sell lots of X5680 and X5677 processors to Appro at a steep discount and let the hedge funds and proprietary trading firms just burn them up like incandescent bulbs. Lee says that Appro is thinking about offering an extended warranty for the CPUs out beyond 30 days for an unspecified premium, but cheap replacement parts are probably a better idea. Intel could even do some deep bin sorting to find chips that run faster and let them push the clocks even further, and could probably turn off some of the cache on the chips — maybe from 12MB down to 4MB — to drop the thermals further, thereby enabling even higher clock speeds. I betcha Intel could push it up to 5GHz if it really tried.

The HF1 server has six memory slots, supporting a maximum of 48GB of main memory with 8GB DDR3 memory sticks; 2GB and 4GB sticks are also supported. This is not a huge amount of memory, but it is overclocked at 1.44GHz compared to the normal 1.33GHz top-end DDR3 memory speed in these Xeon 5600 servers. (Don't expect the memory warranty to hold up, either.)

The chassis has room for two 3.5-inch, 7200 RPM, 500GB SATA disks, which are not hot-swappable and which are not accessible from the front of the chassis. The mobo in the box has two Gigabit Ethernet ports and either four PCI-Express 2.0 x16 slots or, with riser adapter cards, one x16 slot and six x8 slots. The machine comes with a single 1,200 watt high-efficiency power supply, and a second one can be plugged in for redundancy. The mobo has a KVM-over-IP module that can be snapped in for remote management.

Appro is shipping the HF1 server to a limited number of financial-services customers now, and will begin something akin to volume shipments in the first quarter of 2011. If you have to ask what the HF1 costs, you can't afford it. Just like lingerie. ®