IBM has revamped its existing x64-based CloudBurst appliances as well as rolling out an alternative stack based on its own Power7-based systems. Apparently Big Blue doesn't want to be an also-ran in the race to sell preconfigured cloudy infrastructure to companies setting up virtualized private clouds.

IBM is also selling the key secret sauce for deploying virtual machines and managing them on CloudBursties, called Service Delivery Manager with the Tivoli label also slapped on it for good measure, on non-Blue platforms.

The initial CloudBurst cloudy stacks from IBM were launched in June 2009 based on the company's BladeCenter HS22 Xeon-based blade servers and its DS3400 midrange disk arrays. The machines were preconfigured with VMware's ESX Server 3.5 hypervisor and a slew of management tools and a self-service portal then called CloudBurst V1.1.

In February of this year, IBM Global Services started peddling a set of training and installation services to help companies integrate CloudBurst stacks into their existing infrastructure, and start virtualizing physical server workloads and moving them over to the fluffy gear.

With the V2.1 rev of the CloudBurst stacks, IBM is moving to the HS22V blade server, which as El Reg told you back in late February (two days before the CloudBurst services came out) are designed with a larger memory footprint specifically to better support virtualized machines.

The HS22V is based on Intel's 5520 chipset and can support quad-core Xeon 5500 or six-core Xeon 5600 processors in its two sockets. This blade can support up to 144GB of memory using 8GB DDR3 memory sticks and up to the full 288GB of memory supported on the Xeon 5600's integrated memory controller when using 16GB sticks.

In the base configuration of the HS22V blades used in the CloudBurst V2.1 stacks, IBM is putting in 72GB of base memory, which is 50 per cent more memory than the 48GB it was configuring on the HS22 blades in the original CloudBurst V1.1 stacks. Combined with the jump to VMware's latest ESX Server 4.1 hypervisor, this extra memory allows 30 or more virtual machines per blade server to be hosted.

Depending on the CloudBurst configuration (IBM sells things in small, medium, or large sizes, like T-shirts), companies should be able to support 50 to 100 per cent more VMs on the new CloudBurst setups versus the old ones. IBM's testing shows that a single blade configured with 4 GB of memory per VM can host 36 blades.

Here are the feeds and speeds of the CloudBurst V2.1 stacks using Intel's Xeon X5660 processors (which spin at 2.8GHz) in the HS22V blades: 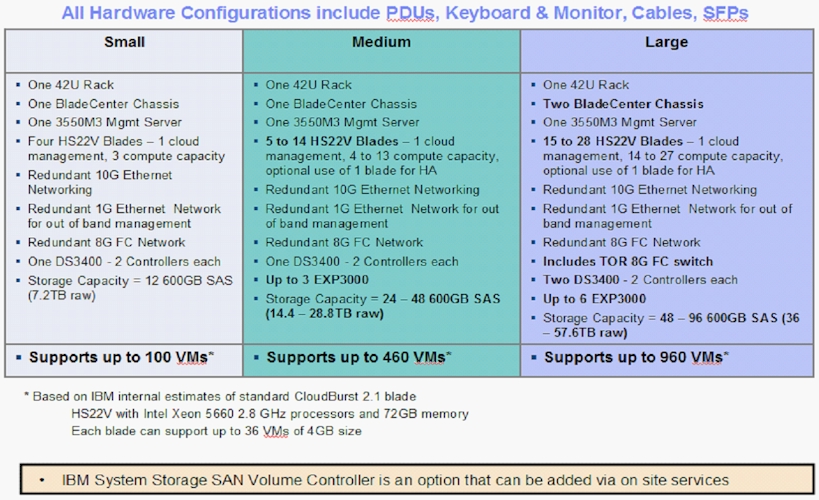 As you can see, the small configuration is aimed at supporting 100 VMs (IBM is rounding down from 108), and the bulk of the iron in the rack is storage, switches, a management server running what is now called Service Delivery Manager (instead of the CloudBurst software), and a mostly empty BladeCenter chassis, which can hold 14 standard-width blade servers, with one of them being used per chassis to control the provisioning of blades and VMs.

In addition to boosting the processor core count and memory capacity on the blades, with the CloudBurst V2.1 private clouds IBM has put in 8Gb/sec Fibre Channel adapters out to the DS3400 disk arrays, and now allows companies to add in an out-of-band SAN Volume Controller to virtualize disk storage.

IBM has actually been shipping these three CloudBurst x64 configurations since September 30, as it turns out, with configurations ranging from four to 28 blades. An extra-large 56-blade setup (that's four BladeCenter chassis loaded up) is coming in the fourth quarter. The small CloudBurst V2.1 setup using Xeon processors sells for $220,000. You can lease this from IBM Global Services for around $6,000 a month if your credit is good and you ink a 36-month lease.