DVD and Blu-ray Disc players, internet radios, sound systems and projectors, TV set-top boxes and the TVs themselves have traditionally been a motley crew, arguing among themselves in so far as they communicate at all, about who should do what and to whom.

The noble aim of the DLNA - the Digital Living Network Alliance - is to make the whole schmeer sing from the same songsheet.

Only this month, LG announced that its debut Windows Phone 7 handset, the Optimus 7, will support DLNA-streamed playback. Ditto audio systems from Marantz and Denon, which will also be compatible with Apple's rival technology, AirPlay, itself derived from iTunes' audio streaming system, DAAP. Sony's internet TV receiver, the SMP-N100, can present DLNA-sourced content, just like the giant's tellies can.

Your average geek has been able to do all this cross-box streaming this for a long time without anybody’s help. Set up your file shares, open a few ports if necessary, perhaps throw in some command line incantations, and with a combination of UPnP AV, SMB, DAAP and other magic, the multimedia can be coerced to flow across the LAN.

The promise of the DLNA, held out since the organisations formation some seven years ago, is to offer the same feature-set out of the box to acronym-phobic consumers who wouldn’t know a MAC address from a hamburger joint. 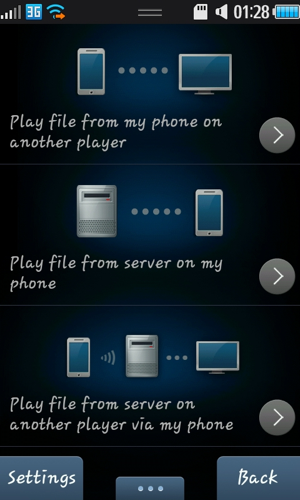 The Samsung Wave mobile phone rather oddly conceals its DLNA functions under Connectivity in the Settings menu. But the three main features of DLNA/UPnP AV are all here. The top option allows media on the phone to be served over the LAN to any DLNA-capable player. The middle option turns the phone into a DLNA player, accessing media from one or more servers on the LAN. The third option establishes the phone as a DLNA controller. In this mode, the phone operates as a remote control, deciding which media from any LAN server is played on any of the available DLNA players connected to the LAN.

Next page: Don't mention DLNA. I did, but I think got away with it...
Page: