Reach out and multi-touch your Mac

Updated Steve Jobs announced today what he suggested was a marriage of iOS with Mac OSX. Called Mac OS X Lion, the next version of the Mac's operating system will bring iOS features to the Mac, including bringing the App Store — and, possibly, its limitations — to the Mac.

Jobs told his "Back to the Mac" audience at the company's Cupertino campus that Apple's goal with Lion is to bring multi-touch capabilities to Mac OS X without making the user actually touch the display.

Describing users interfacing with a vertical display using a multi-touch UI, Jobs said: "We've done tons of user testing on this, and it turns out it doesn't work," adding that "touch surfaces want to be horizontal."

Lion — which Jobs says will be released in the summer of 2011 — appears at first blush to have more UI changes than did its predecessor, Mac OS X version 10.6, aka Snow Leopard, which was was announced in June of 2008, and shipped in August 2009. The snowy OS was essentially a mere tweaking of the previous version, Leopard, announced in June 2006 and shipped in October 2007.

Jobs seemed particularly jazzed about the fact that the App Store is coming to Mac OS X — and that it won't have to wait until Lion's release. The Mac version of the "curated" App Store will be available to Snow Leopard users in 90 days. 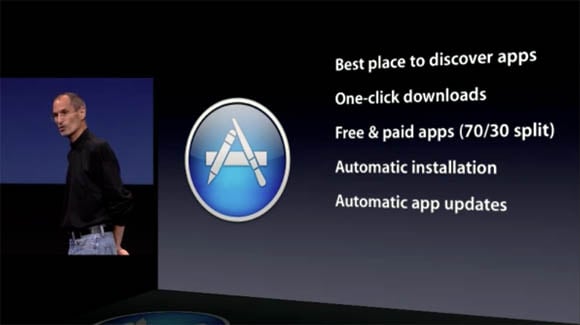 From the brief demo of the Mac-centric App Store, it appears to be quite similar to the iOS version in both form and function. Apps are browsed and purchased from a similar interface, and then downloaded for use on your Mac — actually, as Jobs put it, "on all your personal Macs."

Those expecting Apple to host apps in the cloud à la Google's offerings will be disappointed — or, for that matter, relieved.

Although Jobs said that the Mac App Store would contain both free and paid apps, and that the latter would provide developers with the same 70/30 split as does the iTunes App Store, he made no mention of whether non-curated apps would remain available through traditional channels.

Here at The Reg, we're assuming that they will be, otherwise the outcry from Apple's major software partners — Microsoft, Adobe, and others — would be deafening. [See Update, below.]

As is true with apps for the iPad/Phone/Pod, apps downloaded from the Mac App Store would auto-install and auto-update, and will be paid for using your iTunes account.

Developers can begin submitting their apps to the Mac App Store "in November," and can find more details about the program in the password-protected, developer-only area of Apple's website.

Jobs & Co revealed few other details about Lion, but the Apple CEO said that more would be revealed "over time," before Lion's release. Among the features mentioned were auto-saving and auto-resume, in which an app will launch and reopen to the same work-state as when it was closed.

Features highlighted today included only a pair of finger-flicking goodies: 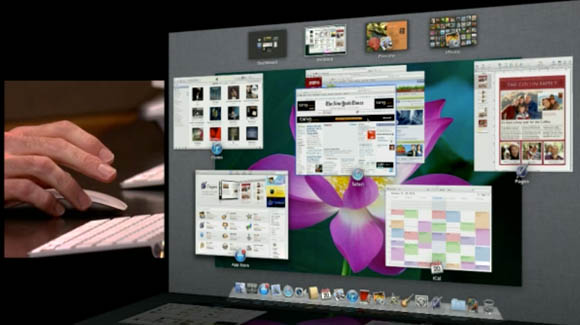 From Wednesday's brief demo, it's difficult to know how much of iOS that Lion will incorporate, or how useful its new UI elements will be for Mac users without a multi-touch trackpad. Much of what was shown was familiar — Stacks, for example, were glimpsed during the demo — but much remains to be revealed in the months to come. ®

When reviewing Steve Jobs' comments about the Mac App Store, we discovered that he did mention that apps would be available from traditional channels. After extolling the iTunes App Store, he said: "And so we'd like to bring it to the Mac, just like it is on the iPhone and the iPad. It won't be the only place [to buy Mac apps], but we think it'll be the best place."