C-3PO and R2D2 campaign will be beamed to hungry aliens

Dixons has put the future of humanity at risk by beaming a series of ads featuring Star Wars refugees C-3PO and R2-D2 into deep space. The campaign touts its Currys and PCWorld chains.

The electronics chain's latest ads will feature the droid pair - including original C-3PO actor Anthony Daniels - breaking into one of the chain's megastores and examining merchandise ranging from cameras to washing machines to fridge freezers.

Apparently the pair will be "amazed at the brilliant technology on offer". This isn't so out of this world - as far as we remember there were no washing machines, breadmakers or tumble dryers in the Star Wars movies, though we seem to remember Aunt Beru having some kind of '70s-style food processor and veggie steamer.

So far, so advertising coup. However, as part of its effort to broadcast the breadth of its offering to as wide an audience as possible, Dixons is to broadcast the ads into space, with the help of Deep Space Communications. 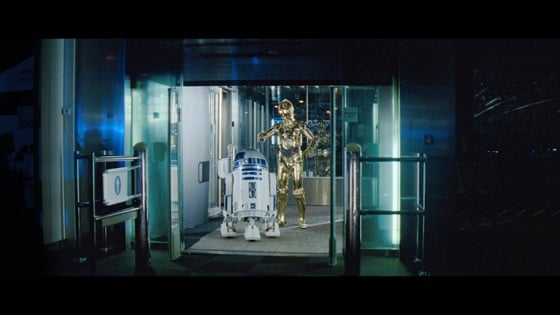 Dixons marketing director Niall O’Keeffe told trade rag Marketing Week: "This is about building our retail brands, not price promotions. We’re a completely different organisation than we were four years ago. This is a symbol of the transformation of Dixons.”

But while the campaign may well be a symbol of the transformation of Dixons for O'Keefe, anyone with a modicum of common sense knows it will also be a symbol of humanity's transformation from argumentative yet mainly free Earth-bound species to the intergalactic equivalent of a bag of pepperami sticks.

Reg readers will immediately understand how it is the height of folly to be broadcasting the human race's existence to all the lizard tailed, uber-intelligent alien races residing in deep space, pondering where to source their next meaty meal.

To highlight the Earth's puny technology while simultaneously hyping its primitive yet expansive range of food processors and microwave cookers just exacerbates the horrendous blunder.

The best we can hope for is that the ads don't feature any actual humanoids and that watching aliens confuse the Lucas droids for actual metallic and not very tasty earthlings, before striking us off their shopping list. ®

Apparently a 60 second director's cut of the ad will be shown during this Saturday's X Factor. Enjoy it. While you can.