Just how special are Power Users?

Standard kit will do them just fine

Workshop Power users are often at the cutting edge of an organisation’s revenue generation, product development, operational excellence or strategic core, and as such they require excellent IT systems to support their role. In years gone by, the needs of these specialist workers often necessitated that their PCs be customised and configured precisely to their needs.

Advances in technology raise the question as to whether desktop systems have now become so powerful in terms of processing power, memory, networking and storage capacities or bandwidth, that the demands of these high performance users can be met by “standard” equipment - or at least a common base with manageable options?

Where power workers are responsible, critical or important business functions, it is important to understand not only the “physical’ requirements of the PC kit in terms of performance, but also to factor in the entire working environment, including the licensing costs of the applications, business risk exposure, time constraints or the cost of lost productivity when something goes awry.

The cost to the business of each of these could easily outweigh the cost advantages of trying to run common machines and support processes across high performance users and less critical ones. This factor alone may justify making use of specialist hardware, but only if this kit is demonstrably more reliable than that of the standard issue equipment.

It is likely that modified, or even dedicated, support processes will be required, not only for the customised workstations but potentially for application packages or other software tools. 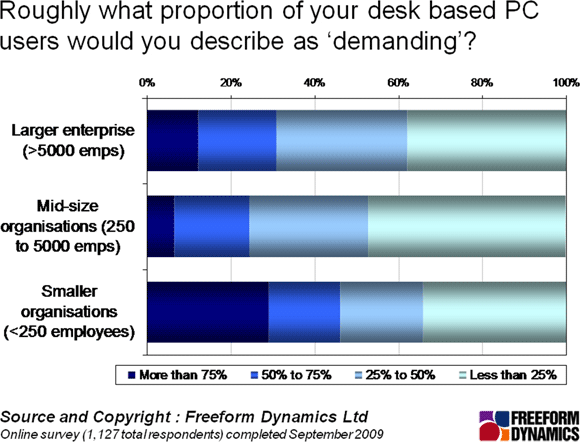 If it is decided that power users require special equipment, it needs to be remembered that the support team may also have to implement specialist hardware recovery or break/fix processes. Clearly, such customised support requirements, potentially making use of dedicated “hot spares”, will come with additional costs.

Companies where over 50 per cent of users are classified as “demanding” are far from rare, as seen in the figure above. For these organisations, the question posed at the start of this article needs to be inverted - it becomes one of whether there are economic benefits to be realised in supplying the minority of non-demanding users with PCs or laptops of a lower specification.

Instead of buying dedicated new machines, this could be achieved by phased refreshes where high performance users receive the newest machines, and older kit moves to the more “casual” users. This approach needs to be balanced against other options, such as dividing the user base into a few “pools” with a standard configuration for each use case.

Whichever way it happens, the process of device selection is rarely straightforward. There is also another factor to be considered beyond the normal cost of acquisition and support. This is the “personal” component that is always involved in PC selection.

If the organisation does decide to “downgrade” power users to the same devices supplied to the rest of the user base, it may well have to take a diplomatic approach when explaining its decision to those who previously utilised specialist kit.

The culture of users is still to regard the PCs they use as their personal device rather than as equipment supplied by the business for productivity enhancement. Perceptions of being “downgraded” are likely to lead to a degree of discontent, something that often results in friction. ®