Toppan Printing has demonstrated a credit card with a colour screen and keypad, claiming that you don't need a mobile phone to manage mobile commerce.

The card, which at 3.9mm thick squeezes into the definition of such, has a 2.2-inch colour screen with a 320x240 resolution, but most importantly Toppan Printing reckons it will cost under $25 when production ramps up next year. As highlighted by NFC World: a card like this makes proximity payments viable without relying on a mobile telephone.

N-Mark (the standard formerly known as NFC) combines a battery-powered tag reader with an induction-powered tag. So if the in-built battery runs out, the card will still work - you just won't able to check your balance or authorise higher-value transactions that might require the use of the keypad. Toppan's card will support FeliCa too, as a manufacturing option.

Interaction is limited to a few keys, unlike Visa's effort to put intelligence into a credit card. Visa CodeSure was demonstrated in July and while we've not used one, it would seem that wear and tear would quickly show which keys were used most regularly. 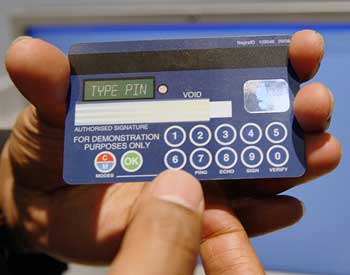 Toppan's card can do a lot more than take a PIN. One could use it to control the level of transaction to be authorised automatically, or control which of the multiple payment schemes that could be installed should be used by default. Toppan says it's also working on showing video on the screen, which seems excessive to us. Just as long as it can play Doom we'll be fine with that. ®