In your pocket, not on your desk

HTML5 now commands a majority of web-based video support, but its rise is being fueled by mobile devices. Adobe Flash still holds the lead in desktop content.

This news comes from a new survey of HTML5-video penetration conducted by MeFeedia, the self-described "largest independent video site on the web with partnerships so big they make us nervous." The company's content partners include Hulu, CBS, and ABC, and they carry content from such sites as YouTube, Vimeo, and others.

According to MeFeedia, 54 per cent of web video is now available for playback in HTML5 — that's more than double the 26 per cent MeFeedia found in their last survey, taken in May of this year. 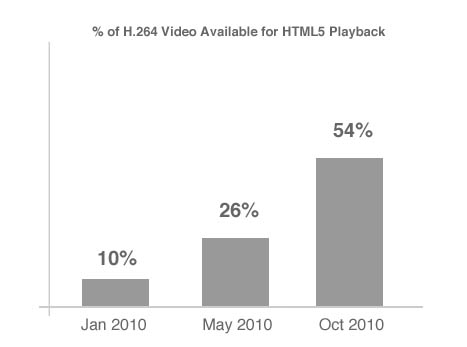 MeFeedia's CEO Frank Sinton notes, however, that "Flash remains the dominant player within desktop environments." The rise of HTML5 is being fueled by Android devices, along with — you guessed it — Apple's iOS family: the iPhone, iPad, and iPod touch.

The survey's stats were based on MeFeedia's own video index, which Sinton claims encompasses "millions of videos," and counts only videos presented using the HTML5 <video> tag. As might be surmised, the videos in question were encoded in H.264, according to Sinton, "in the vast majority of cases."

The rise of HTML5 must surely bring a smile to the face of Apple's CEO and CFO (Chief Flash Opponent) Steve Jobs, who has famously banned Adobe Fash from iOS devices, and castigated it in an open letter entitled "Thoughts on Flash" in April.

Jobs also ragged on Adobe and Flash when interviewed at the D: All Things Digital conference in June: "We told Adobe to show us something better, and they never did. It wasn't until we shipped the iPad that Adobe started to raise a stink about it," Jobs told his interviewer. "They made a big deal of it — that's why I wrote that letter. I said enough is enough. We're tired of these guys trashing us."

Adobe, of course, admits to no letup in its mobile Flash efforts. At its MAX conference in Los Angeles this week, the company's chief technology officer Kevin Lynch trotted out a sampling of Flash-capable tablets from Samsung, Malata, and Research in Motion; announced that mega-publisher Condé Nast would offer Flash-based e-mags; and claimed that the number of Flash developers has grown by 50 per cent in the past year.

That's all well and good. But as Sinton notes: "HTML5 compatible video available on the web is still experiencing substantial growth & the rate of adoption is picking up." ®