Oracle back in the Unix game with Sparc T3 servers

More than twice the bang for the buck

Oracle was vague about when its new Sparc T series servers using the 16-core "Rainbow Falls" Sparc T3 processors were coming to market when they were launched a month ago, but two of the four machines are now shipping. And Oracle has slashed prices and boosted performance to show IBM and HP that it is indeed back in the Unix game.

Oracle is even offering them in its online store, like Sun Microsystems used to do. And because of that, comparisons can be made to the prior generation of Sparc T entry and midrange servers.

Although Oracle, like Sun, isn't providing relative performance metrics for its Sparc T family of servers that show the performance for each possible configuration, if you assume that a clock is a clock, and that performance scales with the addition of CPU cores and faster clocks, then the new Sparc T3 machines will offer substantially better bang for the buck that their Sparc T2 and T2+ predecessors.

I know what you are thinking: Any company that can get that much money for a single-socket server, even if it does have 16 cores and 128 threads, has to have a profitable hardware business unless the chips are being carved by hand. A more reasonable base configuration with 32GB of memory and two 300GB disks costs $21,368, and pumping the memory up further to 64GB boosts the price to $24,708. Loading it up to its full 128GB of main memory will set you back $44,228.

The single-socket box most like the Sparc T3-1 machine in the earlier Sparc T2 series of servers is the single-core T5220, which uses two different SKUs of the Sparc T2 chips. In a base configuration, the T5220 has a quad-core T2 chip running at 1.2GHz with eight threads per core for a total of 32 threads.

That machine comes with 8GB of memory and two 146GB disks, and currently costs $15,303. In a more reasonable configuration, using the full eight-core Sparc T2 chip running at 1.4GHz (delivering 64 threads in that single socket) and with 32GB of memory, the list price is $27,888. Boosting the clock speed of the T2 chip to 1.6GHz raises the price dramatically, to $46,028. While some of that price jump is due to doubling-up the memory, about two-thirds of it is for that incremental 200MHz on the chip's clock speed, which means you have to be really desperate to buy it.

To show the relative improvement in bang for the buck that Oracle delivers with the Sparc T3 machines, I built the table below, which shows the chips, cores, clocks, memory configuration, and a metric I call Relative Ooomph for lack of a sanctioned relative benchmark test rating from Oracle. This is just chip count times cores per chip times clock speed per core. Because the T2 and T3 chips have the same thread counts (eight per core), this is a rough reckoning of performance you are going to get for Java or database workloads without doing your own tests. 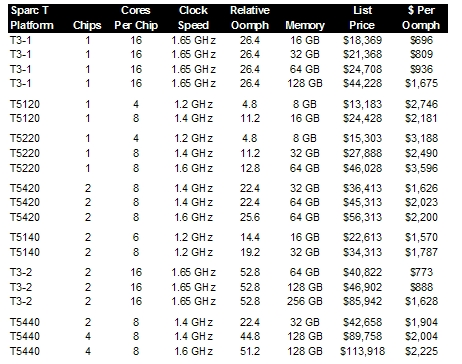 As Oracle has said, the jump from 8 to 16 cores that is part and parcel of moving from the T2 and T2+ chips to the T3 chips yields roughly twice as much performance as the top-bin parts. There's only one clock speed with the T3s, and Oracle is not yet shipping partially dudded versions (as all chip makers do) at a lower price to capture as much money as possible.

Oracle is keeping it simple; this may be on purpose, or not. The Oracle does not speak, after all, unless it wants to, so it is hard to say because no one answers a question at Oracle. (Which means that the company's name should not really be Oracle, now should it? Perhaps Denial, or Hubris, or Mine Mine Mine would be a better name?)

As you can see from the table, the Sparc T3-1s offer ridiculously better price performance than the T5120, T5220, and T5420 machines they replace in the T Series server lineup. A T3-1 with the same 16GB of main memory and more than twice the oomph of the T5120, which works out to 68 per cent better bang for the buck. (I can't imagine Sun offering the servers at this price.)

The price/performance of the T3-1 compared to a T5520 with 32GB of memory is similarly 67 per cent better. Boosting it to a fatter 64GB configuration, the bang for the buck improves by 74 per cent. If you compare it to the prior two-socket T5420, the T3-1 offers 54 or 57 per cent better oomph for the dollar — depending on if you choose the 1.4GHz or 1.6GHz in the older boxes —which is the same thing as saying that for around half the money, you can get the same performance on the newer Sparc T3 box.

The other way of looking at that table is to see that a two-socket Sparc T3-2 can do the work of a Sparc T5440 four-socket box from yesteryear. The price/performance improvement ranges from 61 to 65 per cent, again depending on if you choose the 1.4GHz or 1.6GHz chip in the older T5440 box.

Oracle is not yet shipping the four-socket Sparc T3-4 system, so we don't know if the server wannabe will keep the same relative price/performance on this box, or try to charge a premium for that extra capacity. Every other server maker charges a premium with the jump from two to four sockets, but Oracle could decide to buck the trend.

By the way, the T3-1B blade server is not yet shipping, either, so we don't know its prices yet. ®