ITU At the International Telecommunication Union's quadrennial Plenipotentiary congress in Guadalajara, Mexico, bureaucratic posturing is as endemic as one might expect for such a creaky, hide-bound United Nations agency.

Take, for example, the style of debate — if, indeed, the word "debate" can be properly applied to the florid rhetorical style employed by most session speakers.

It reminds me of 1990s television, on the UK's Channel 4, when the Pakistani team game of Kabbadi was shown in Sunday mornings for several hours — the only explanation being that broadcasting rights must have been cheap.

Kabbadi is a silly but oddly fascinating game. A bunch of middle-aged, overweight men stand at opposite ends of what looks like a small beach-volleyball court (without the net). One man steps forward from one team (the attacker); one man from the other team meets him. The first man has to get past the second to the other end of the court — if he does, he gets a point. If he fails, the teams switch, defense to attack and vice-versa.

The twist is that the attacking man has to constantly mutter the word "kabbadi". The usefulness of this is that it naturally limits the time the attacker can spend trying to find his way past his opponent — because he runs out of breath. 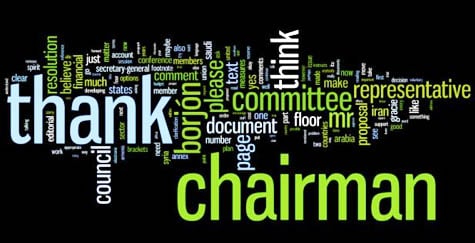 The game is played by the same middle-aged, overweight men, although they're dressed in suits rather than stripped to the waist. There are always two sides (although the team members vary). And they take it in turns to square up to one another and find a way to sneak past them.

Just like Kabbadi, it's very silly but oddly fascinating.

If you ever had any doubt that there were some entrenched and appallingly out-of-date government representatives in the ITU, it would wiped out when you witnessed a discussion on budgeting restrictions.

Belt-tightening was made necessary when several large countries reduced their contributions to the ITU. Both France and Germany went from paying the maximum 30 units to 25 units, leaving just the United States and Japan as the Big Boys paying full whack.

With each unit worth 318,000 Swiss Francs ($330,000), that meant a reduction of $3.3m. Some of this shortfall was balanced with increases from others — Saudi Arabia and China for example — but the ITU's budget is still down around $1.5m. And so it outlined different ways that costs could be cut back, including cutting staff.

Incredibly, it was the very last cost-cutting measure that was the focus of debate. Measure number 20 suggested that it would be a good idea to: "Move, to the extent practicable, from present communications by fax between the Union and Member States to modern electronic communication methods."

Currently, communication between the ITU and its 196 members states is done both by fax and by email. Most of the governments, however, find the piles of faxed materials an unnecessary hindrance.

However, a number of countries were appalled by the idea of moving away from fax machines. Almost as if it has been scripted, the same countries that have been holding up internet discussions all week spoke out against a move to email: Syria, Iran, Lebanon, Saudi Arabia, and Senegal.

It is worth noting that these same delegates are the only ones in the room that do not have laptops. And it may also be worth noting that Syria had earlier also insisted that the use of telex be included in one of the documents talking about IP networks. 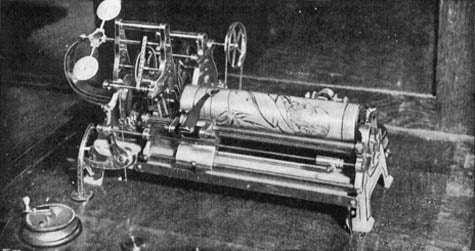 No, this isn't the fax machine preferred by some ITU members — but it's close

Now, you can argue back and forth about the state of networks in the Middle East and Africa, but the stark reality is that there are permanent representatives to the ITU — the body that decides cutting-edge technology standards — that are ten years out of date.

We all have a relative who won't replace their ancient mobile phone or who can't find the bookmarks in their Web browser, but usually they spend most of their time watching TV or puttering about in the garden. Very few of them are dictating global telecommunication policy at the United Nations.

You can almost taste the frustration at the ITU as they wait for these old men to retire so they can get on with bringing the organisation in line with the modern world. It will happen in the next few years, and then you can expect to see a huge raft of structural changes. Hopefully one of them will be a term limit on representatives and a removal of the position of "permanent representative".