Updated with pics The Register's epic Paper Aircraft Released Into Space (PARIS) project ended in glorious triumph this afternoon as our Spanish ground pursuit team finally discovered the landing site of Vulture One, the cutting edge stationery spacecraft piloted by our intrepid playmonaut.

Following a nail-biting few hours in which Vulture One had been feared lost with all hand after the APRS system failed to pick up any location telemetry from the plunging craft, the pursuit team decided to search back along the ground track of the PARIS main-payload mothership module, previously recovered successfully.

Soon they picked up a weak signal emitted from the systems of the downed spaceplane, but struggled to obtain an accurate fix. Tension mounted here at London control and among the mobile unit, as all were only too aware that mere hours of battery life remained - after which there would be almost no chance of a successful recovery. Our short 'naut and his famous craft would then be doomed to an Elvis- or Flying Dutchman-style future as a spurious urban legend, fated to forever fly the skies of mystery.

Following a bone-shaking drive across rugged terrain, the mobile team were forced to abandon their vehicle and plunge into a thick pine forest, the faint but gradually strengthening signals from Vulture One's transponder their only guide.

Then the great news came through at last - they had made it to the landing site and recovered the playmonaut and his craft.

Reg scribe John Oates, embedded with the mobile team, breathlessly reports that Vulture One landed "almost completely intact", having suffered only a minor "hole in one wing".

"Playmonaut safe and sound," he added, describing the mission as "appallingly successful".

The mobile and engineering teams, parched after their heroic endeavours, appear now to be hell-bent on celebrating their achievements with suitable liquid refreshment. However, they've promised that on reaching an area with good mobile data coverage they'll update this report with near-real-time imagery of events as they unfolded.

More detailed reconstruction and reports from the mission team will follow once they've recovered from their exertion. For now, this is the London tracking station signing off with congratulations to all concerned. ®

Good as our word, the recovery team has managed to get its necks out of the beer trough to post three hot-off-the-press recovery pics from our mission headquarters (Bar Tito, Navatejares, Avila).

The main payload obligingly dangled itself from a tree a short drive from San Martin de Valdeiglesias, Province of Madrid. You'd think that rescue operatives Federico Buenadicha, Steve Daniels and John Oates would look a bit happier after what was in reality quite an emotional moment: 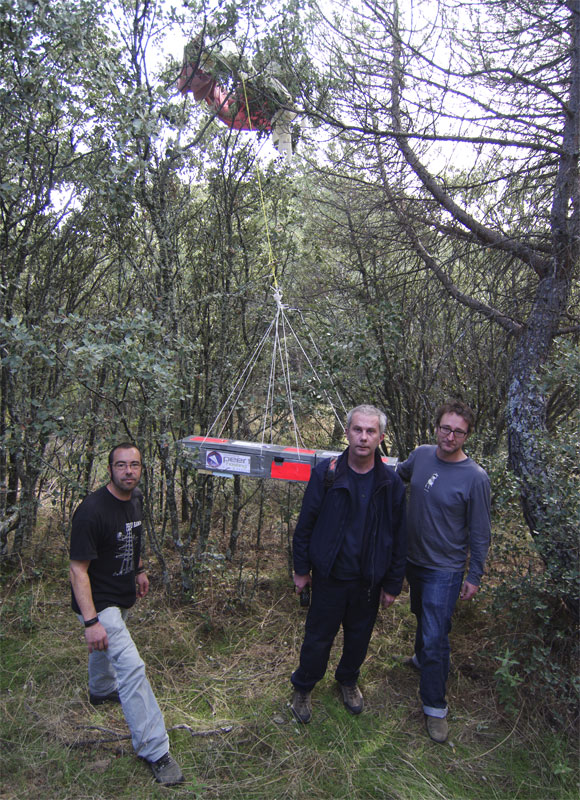