No wonder CompSci grads are unemployed

No interest in tech, crap teachers, and they can't spell

Opinion Recently a director at a huge bank asked me “Do British students learn algorithms?”

At first I thought he was joking, but even though he was paying three times what the average new grad gets paid, he felt despair. Because of similar experiences I was surprised to read that only 17 per cent of CompSci grads from last year haven’t got a job yet.

Many are Java programmers. OK, I’m no fanboi, but many seem to know no other language, with bog standard languages like SQL, VB, Perl, et al being alien to them. I’m an old git, but still value leading edge stuff such as F# and CUDA, which show you are able to do stuff that others can’t. I am uniformly disappointed.

Yes there are many people doing Java, but that is of almost no importance. What matters is the number of jobs per person chasing them, and that has an awful ratio. Everyone in India, from waiters to religious gurus, knows Java, and so do all recent western CompSci grads. That is the supply/demand ratio from hell, and it’s getting worse.

Java fanboys tell me that it is "easier" than C++, and seem miffed when I agree in a sneering way. A CompSci grad is supposed to be able to do difficult things that arts grads simply can’t understand. You need to understand that a CV is an advert. BMW don’t say their cars are “so simple that they are built by cows”, and even the lowest paid newbie costs more to own a year than any car BMW produces.

As far as I can tell, only Queen Mary College has undergrads bright enough not to be scared of C++, and even then less than half take the option. Kings College students/victims told me that they do operating system internals in Java, and no they weren’t joking. That pitiful process is actually better than the average CS undergrad, who seems to regard the insides of operating systems with the same superstitious fear experienced by greens over nuclear energy. 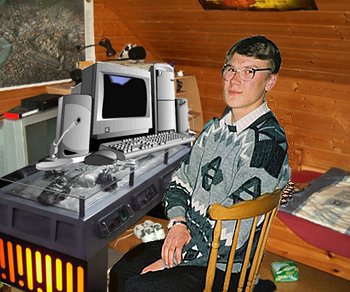 If you haven’t trashed your computer while doing something

questionable, then you’re not a computer scientist – you’re just

an arts grad who didn’t get laid.

Looking at syllabuses, I see trash including “Ethics”, “Computers and Society”, and other nonsense where you write essays rather than think. Even then, about a third of the newbie CS CVs I get contain tragic spelling and grammar errors. I spot these using advanced technology from Microsoft, codenamed “MS Word”, which actually underlines your incorrect spelling and offensively poor grammar. I don‘t care which country you came from, I do care that this makes it impossible for me to sell you, since a sloppy programmer has no value.

Worse still is that percentage who have done something not on the syllabus, and that’s perilously close to zero. As a Reg reader you will have seen many abuses of technology, combined with serious innovations and screw-ups. This is programmer culture; technology is about changing things, not churning out what has been done before, because a machine can do that more cheaply.

Why are there no sudden dramatic entrances to the Internet by newbie Brits? They’re happy to use this stuff, but where are the new cool ideas, driven by enthusiasm? When I find no alternative but to speak personally to CS grads, I find them a miserable lot who require all my skills to engage in any conversation about anything, even though I’m a fellow geek who actually likes technology.

Some newbies tell me they “hate Microsoft”, which I can accept; IBM paid me serious money to do that professionally, even though when I left college I regarded Big Blue as a mildly evil dinosaur.

The wheel has turned further, and MS is seriously worried about the lack of young people immersed in their technology. If CS grads were smarter, they’d see this as an opportunity, because MS is still a vast percentage of all corporate IT. Yes, VBA is the worst language in the history of the world, but you can get good money doing it, and a good programmer knows that it is how you think, not the language you code in, that determines your ability.

Talking to academics, they of course complain about the funding, and point to a double whammy that the Dotcom boom lured good people into industry, and reallocation of funding to the study of Morris dancing has made it worse even before the new cuts. (The Morris dancing example is a real one.)

Although I’m cynical about all this, I still was shocked by the revelation that CS isn’t actually a popular subject among teenagers smart enough to do it properly. This is in spite of Math/CS being in the top band for lifetime earnings.