Authoritative boffins: 'It's a UFO all right'

Baffled passers-by have discovered a large, bizarre, blob-like lifeform floating in an artificial lake in Virginia. As there appeared no way in which the slow-moving, four-foot "mysterious blob" could have got into the lake naturally, the thing's discoverers - theorising that it must have come from above - have dubbed it the "alien pod". 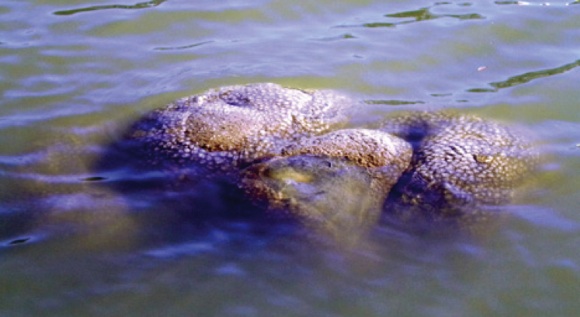 Reportedly the "pod" was discovered by office worker Tracy Collier while out walking her boss's dog by the manmade lake in City Center at Oyster Point, a development in Newport News, Virginia.

“The lake is behind our office," says Collier's excellently-named colleague Charles Schmuck. "Tracy was walking by the lake, saw the object, and asked everyone else to come out and take a look.”

It was another colleague, Dale Leonart, who came up with the extra-terrestrial angle on seeing the lifeform.

"It has to be an alien pod," he stated authoritatively - though later reportedly adding that alternatively the thing might be "some type of sponge".

The puzzled office workers decided to call in expert help from boffins at the local Virginia Institute of Marine Sciences (VIMS). They sent an email with photos attached (see above) which read in part:

The object is about 4 feet in diameter. It has moved about 6 feet down the shoreline in the last 24 hours. It 'jiggles' when the waves in the lake hit it… when we prod it, it seems to be spongy feeling… The texture appears to be that of a rock with algae spots on it — it is brown and yellow, with a pattern of some type.

Sadly the VIMS experts pooh-poohed the alien landing theory. After a heated internal debate, they identified the blobaceous lakeside intruder as a very large colony of Pectinatella magnifica — aka the "magnificent bryozoan".

According to the boffins' description:

Colonies of Pectinatella magnifica feature a surface layer of adjoining "rosettes" — each with 12-18 animals or "zooids" — around a central jelly-like mass that is 99% water. The colonies can be free floating or attached to a piling or other submerged object. One study even showed that young colonies of P magnifica can actually move on their own by coordinated pulsing of the individual animals.

VIMS prof Carl Hershner says that the blobby hive-jelly creature eats algae and thus is “actually a good thing to have around, despite its looks. It's not a sign of bad water quality, and it doesn't hurt fish. It can clog pipes, though, and it will be smelly if it’s removed from the water.”

The VIMS boffins add that they are always glad to receive reports of UFOs ("unidentified fishy objects") on their patch - Chesapeake Bay and surrounding waters - and offer more information on that subject here. ®

Binance robbed of $600 million in crypto-tokens

Instead of a week of profits, mere days of net income for Cook
Personal Tech7 Oct 2022 | 3

New hardware? Consultants? You tell us because your infosec is off the grid
Cyber-crime7 Oct 2022 | 5