'It's moviemaking from a Barbie doll's point of view - literally!'

I am the father of four daughters, aged 23-10, and have learnt a thing or two over the years about Barbie dolls. The most salient thing is the "generational split" within my family - the two older girls owned Barbies and played with Barbies - the two younger junked the hand-me downs and never played with dolls. Of any kind. Ever.

Barbies? Meh! For them, it is about cameras and camcorders - pop music and phones and laptops and social networking. Attitudes like this are a headache for Mattel, Barbie's owner. Not so very long ago, they had a reliable demographic of girls who bought Barbies, lots of them, and accessories, lots of them until they were nine or 10. These girls don't play with dolls anymore.

So what to do? A ha! Let's stuff a camera in the body of a Barbie and see if we can latch onto what today's pre-teens are really interested in. How much should we charge? 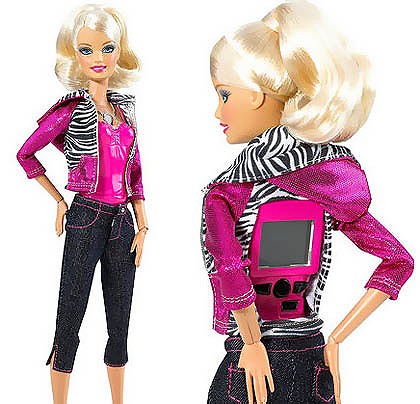 How about £59.99 - no, £44.99, that sounds about right. The camera can capture 30 minutes of video which you can see on an LCD on Barbie's back. You can transfer the footage to a PC or a Mac. Here's some of the spec for Barbie Video Girl , lifted from Argos, the UK retailer: 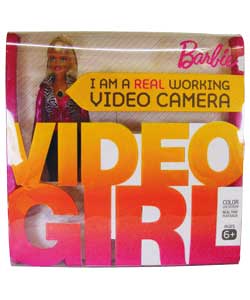 This is genius. Our main concern would be that any child young enough to actually want to play with a Barbie - maxing out at five years-old these days, would break the camera pretty damn quick. And who these days would pay £44.99 for a novelty camera case, when you can give your kid an old digital camera to play with?

Others are concerned the psychological and privacy implications of Barbie Video Girl. The Sydney Morning Herald has assembled a bunch of critics, including a clinical psychologist called Sally-Anne McCormack, who calls on parents to boycott the product: "Essentially, it's a hidden camera. Children don't look at video clips the way that adults do and there might be inappropriate shots that they upload onto YouTube."