Space Shuttle Discovery, which had originally been meant to lift off yesterday, will now depart on its final flight tomorrow following last-minute repairs. 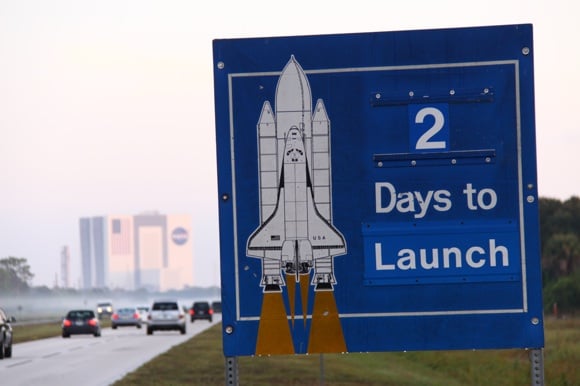 Discovery, veteran of no fewer than 38 previous space flights, is the most-flown of the shuttles and holds many records. The spaceplane has carried more people - 246 - into space than any other vehicle: including the first female to ever pilot a spacecraft, the oldest person to fly in space, the first African-American to perform a spacewalk, the first cosmonaut to fly on an American spacecraft and the first sitting member of Congress to fly in space (Utah senator Jake Garn in 1985).

The shuttle was also the first spacecraft to retrieve a satellite and bring it back to Earth. It was Discovery, too, which originally took the Hubble Space Telescope to orbit. Since its first launch in 1984, the veteran craft has logged almost a year in space and has flown almost three times the distance between Earth and the Sun.

Tomorrow's final mission will see the NASA workhorse lift six people and 10 tonnes of cargo to the International Space Station (ISS). That cargo will include the Permanent Multipurpose Module (PMM) "Leonardo" - a pressurised space pod previously mounted in Shuttle cargo bays for ISS missions, which has now been modified for permanent attachment to the Station's Unity node.

Discovery has also been loaded with many other items, including experiments and supplies for the station. Among these will be water and waste-water tanks for the famously troublesome ISS urine and sweat-processing systems and waste-water recyclers - and NASA's well-known humanoid "Robonaut 2" or "R2" robot, intended for various repair and maintenance tasks at the station.

The shuttle will also be carrying 16 mice in individual, automated life support podules. It's hoped that the bizarre effects of extraterrestrial life - microgravity etc - may cause these mice to develop a terrifying form of space plague which could potentially wipe out the entire human race, with many scientific and medical benefits expected.

The whole caboodle - plague mice, Robonaut, golden barrels, living module, orbiter, fuel tanks, boosters and all - is now sitting on Launch Pad 39A at Cape Canaveral. Providing the meteorologists are right, they'll all begin their journey into history tomorrow. ®