The UI is a far cry from the slick modern interfaces of HP's Palm, Apple and Windows Phone 7, and Android. Does this actually matter? There's more to usability than eye candy. In practice – yes and no. Symbian^3 shows the result of some emergency, roadside repairs, and some of these work so well, you don't see the joins. But elsewhere the legacy UI pokes through – you notice the extra, now unnecessary level of indirection. Imagine operating Windows by poking a mouse with a toy broom. 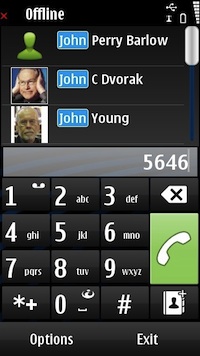 For example, the phone has been criticised for lacking a keyboard in portrait mode, and presenting the user with a graphical implementation of a T9 dial pad. Cue guffaws. But once you get over the incongruity, you can see the wisdom of the decision. In practice, the T9 pad made finding and calling people as easy to use as any phone on the market, and easer than most - and isn't the point of a phone?

The dialler rapidly finds contact by using a trick pioneered by Qix, but part of Windows Mobile and Nokia's E-series for years. So entering "5-3-8-4" finds you all your Kevins. [jkl - def - tuv- ghi]. Or all numbers with the string 5384.

For many core functions that the user might repeat frequently, it works well. I was surprised, because initial impressions – formed from trying to use the Home Screen(s) – are really horrible. But taking and reviewing images and videos is fast, and browsing them fast too. Symbian phones would typically lag when asked to start a new process. But starting (say) Profiles or Clock and switching to the app is instant.

Onto to the not-so-good. You'd think that after the criticism of the N97, Nokia would clean up the Home Screen and focus on a really great experience. If anything, this has gone backwards. And yet another year has gone by without rationalising the settings, which remain spread all over the place, some in non-obvious places. 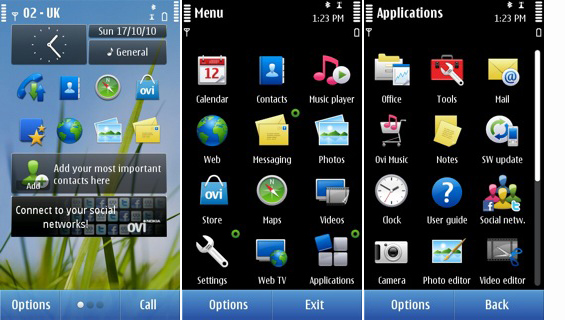 The default Home Screen is now screens, these are populated by blocky widgets, just as before. It imposes a rigid structure on the phone and tailoring it isn't easy. You can't place a shortcut to a person, or to a person-orientated action ("eg create a new SMS with Dave as the recipient"), and you can't drop applications wherever you like. You can't set a shortcut to activate a particular setting, either – although the default behaviour of one of the built-in widgets goes a long way – you can open the clock (instantaneously), set Profiles, and view connections.