A real performer. But will it love you back?

Review Fedora 14, released Tuesday, has quite a bit of new stuff under the hood - things you probably won't notice most unless you're a systems admin or use Fedora for development.

For Fedora this is business as usual and, many would argue, the way it should be. After all, the latest UI bling is useless if the underlying system isn't delivering the tools you need on a rock solid foundation.

It also makes a nice contrast to Canonical's Ubuntu, which has a habit of taking Fedora's upstream contributions, wrapping them in a prettier package and stealing the limelight. There's nothing wrong with that, it's the nature of open source software - you can do what you want with it. It's just that Fedora rarely ends up getting the credit it deserves for making desktop Linux as usable as it has become over the years.

However, those who love Ubuntu's slick looks might want to take a closer look at Fedora 14. Given Ubuntu's controversial decision to switch to the Unity desktop in its next revision, it's entirely possible Fedora will look more appealing to casual users over the next year. While Fedora may be less flashy than Ubuntu, there's plenty here for exiled GNOME lovers to embrace. What's less clear is whether Fedora will return that embrace. 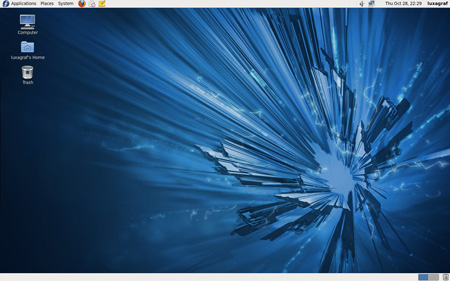 Fedora has long maintained that it is not looking for users, it's looking for fellow contributors. That is, the distro doesn't want to make Linux easier for you, it wants you to help it make Linux better for everyone.

For the most part that's an academic (and marketing) distinction, but when you start comparing release notes between Ubuntu and Fedora one thing become very clear - Fedora is all about tools and foundations.

That said, there are several enhancements in Fedora 14 that any user will appreciate. For example, Fedora 14 ships with libjpeg-turbo. While that may not mean much to the average user it translates into much faster JPEG image handling and you don't have to be a system admin to appreciate faster photo apps.

The libjpeg-turbo support uses the enhanced fork of the original libjpeg project. For those running Fedora as a web server, that means faster compression and decompression for server-side apps working with image files. The updated library should also speed up any other applications working with JPEG images, including photo managers, video editors and PDF readers.

Another somewhat technical, though useful, enhancement is SPICE - the Simple Protocol for Independent Computing Environments. SPICE is a framework for setting up and interacting with virtual machines. It offers accelerated graphics, encryption and video and audio tools.

For those running Windows clients in a virtual machine SPICE offers a few Windows helpers right out of the box, including a video driver, an agent for performing operations inside the guest system and virtio serial drivers for talking to the agent.

Although SPICE has been available in the repos since Fedora 12, the new tools make getting Spice up and running much easier.

Along with improvements like SPICE, desktop Linux users will find nearly the same compliment of GNOME apps that ships with Ubuntu. In some cases the app choices are different, but for the most part the two ship with roughly the same GNOME software.